The result will be a new multi-million pound meat processing plant to be built at the Thainstone Agricultural Centre, just outside of Inverurie, where Scotch Premier and Mathers are presently based.

Commenting on potential job implications a joint statement, released by the three businesses said: The intention is to retain as many of the positions as possible, however, it is likely that there will be some job losses.”

The newly created enterprise will be led by Robbie Galloway, the managing director of J.W. Galloway (who own Scotbeef and Vivers), supported by ANM Group chief executive Pat Machray OBE, and with Mathers’ managing director, Michael Mountford in the on-going role of site director. 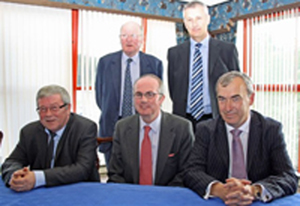 Robbie Galloway said: “These are extremely challenging times for the meat processing industry in Scotland with the twin pressures of a shortage of raw materials and the continuous price pressure from customers.

“To ensure sustainable business, efficient facilities are now a prerequisite. The interim consolidation of SPM and Mathers, which we will oversee, into one facility at Inverurie, followed by the relocation of the business to a new state-of-the-art facility at Thainstone will provide that and a platform for future growth.”

Mr. Galloway added: “This will need to involve assistance from the public sector, significant efforts from all concerned and no little pain in the short term. We are committed to a viable and long term business in the North-east and will work hard to deliver that.”

Pat Machray OBE, chief executive of ANM Group which runs the SPM meat plant, said: “This is a groundbreaking agreement to safeguard the traditional agriculture industry in this part of the world.

“It has been roundly accepted that the current market for meat processing in the North-east is simply untenable and we have a responsibility to our members to move swiftly, addressing the issues at hand and making bold decisions to protect their businesses and a vital component of the Scottish economy. Half measures will only delay the inevitable, with an immeasurable and lasting impact on both the industry and the region.

“While tough decisions lie ahead of us all, the enormous significance and importance of this new partnership cannot be understated – this agreement should secure the long term future for meat processing in the North-east while maintaining a highly competitive market, benefitting farmers, customers and the local economy as a whole.”

He concluded: “It is important for me as the CEO of the ANM Group to maintain the strong link our co-operative has with the meat processing sector and I look forward to working with both Scotbeef and Mathers for the good of the industry.”

Michael Mountford, the managing director of Mathers said: “The directors of Mathers are delighted to be part of this combined business venture. Our shared vision for this new formed partnership is to secure the future of the meat processing industry in Scotland.
“We very much look forward to working with Ian and Robbie Galloway and Pat and I believe that the wealth of experience from all parties will lead to a promising future for all concerned.”

John McIntosh, the chairman of the ANM Group, said: “We very much welcome this development which is a key element of the board’s vision for the future progress of the ANM Group. We will do everything possible to ensure there are no barriers to Robbie, Pat and Michael achieving their goal.”