Scottish farmers have a fantastic opportunity before them to increase production of livestock and capitalise on the demand for Scotch Beef and Scotch Lamb, according to Jim McLaren, chairman of Quality Meat Scotland (QMS). 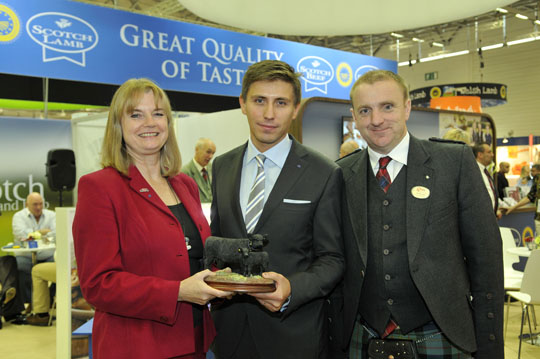 Speaking today (Monday 7th October) at one of the world’s biggest food fairs, Anuga in Cologne, Germany McLaren urged producers to have confidence in the long-term future, saying the industry had moved away from the price cycles witnessed in the past.

“This is a very exciting time for our industry. Our exporters can offer overseas buyers provenance, traceability, quality and flavour.

“Yes, prices are high and there is little to suggest that will change but clearly buyers recognise the value of the products they are getting from Scotland and they can’t get enough!”

During a presentation on the QMS stand at Anuga which recognised an Italian importer for his longstanding loyalty and commitment to promoting Scotch Beef PGI, British Consul-General Susan Spelling added her commendation of the quality of the Scotch brands and the Scottish production process.

Giambattista Lama of Lem Carni, based in Emilia Romagna in Italy, was one of the first importers who recognised the potential of Scotch Beef. For over 25 years he has developed sales, specifically targeting top restaurants and butchers in Italy.

“Lem Carni’s support and great enthusiasm for Scotch Beef has been a key factor in the development and success of the brand in Italy,” added Jim McLaren, QMS Chairman.
“They have worked tirelessly to promote Scotch Beef to their customers and have been dedicated ambassadors. It is therefore our pleasure to present them with a token of our appreciation.

“Demand for our products, in particular our Scotch and Specially Selected Brands, remains high in Italy, and across the continent. It is also extremely encouraging to see growing interest from new and expanding export markets.

“The importance of provenance has been never been greater and the PGI status of our Scotch Brands gives an assurance of traceability which few in the world can match.”