Shropshire butcher warns horse meat scandal may not be over

Shropshire butcher warns horse meat scandal may not be over

A Shropshire butcher has warned customers not to get complacent as further testing for horse meat is confirmed.

The Foods Standards Agency (FSA) has announced that beef products will be subject to a new round of testing as requested by the European Commission as part of a follow up to the horse meat debacle last year.

But Kay Badley, operations director of G. N. Badley & Sons in Trench, Telford, is concerned about what might be found.

She said: “When the scandal first broke last year we saw a huge spike in sales as people in Telford returned to their local family run butchers for fresh, good quality meat that they could trust. 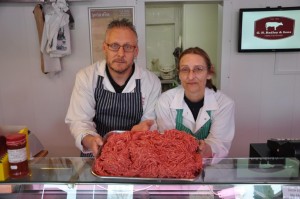 “Whilst we have retained a lot of those new customers who have been impressed with our service, I know a lot of people thought that after the first round of testing, all meat would be ok.

“I think people need to remember how big the industry is and not get complacent that all traces of horsemeat will have been scrapped from where it was found, simply because of the initial tests.”

Mrs Badley said she welcomed the second round of testing, which is designed to give additional reassurance to customers.

Testing will be carried out on 150 samples of raw beef products including mince, burgers and sausages, as well as cooked ready meals.

Samples will be taken by 24 local authorities from across the UK from retail outlets, wholesale catering suppliers and cold stores. They will be submitted to the European Commission by July.

Mrs Badley added: “I am concerned about what might be found in this next round of testing.

“Meat is produced in such a variety of ways and the industry is constantly changing.

“We have been making products at our butchers in Gibbons Road for almost 40 years and because everything is handmade on site we know exactly what goes in to our products.

“Whatever the results of the new wave of testing, we need to hammer home the fact that both customers and sellers can only really be sure about what is in their food if they are talking to and buying directly from the people that make it.”

The FSA has said that this testing is in addition to the routine sampling and quarterly sampling that has been taking place, and is not in response to new intelligence about food fraud.

The agency will reveal any samples that test positive for horse meat contamination above 1%.