Scottish sheep farmer frustration with major supermarket chains, Tesco and Asda, is growing as significant levels of imported lamb continue to be found on their shelves despite Scottish lamb being in peak season. 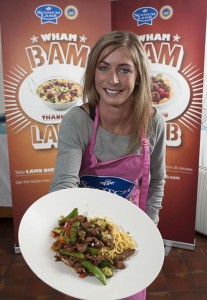 The ‘Wham, Bam, Thank You Lamb’ campaign is in full swing and producers working hard to produce some of the best lamb are demanding more from the two major supermarkets.

At Tesco, that discovery is at odds with commitments made by the retailer this spring, following the horse meat debacle, that it was going to bring its food chain sourcing ‘closer to home.’

This is the second successive month in which NFUS has highlighted the volume of Australian and New Zealand lamb in Asda and Tesco stores. In stark contrast, Morrisons and Sainsburys’ stores visited by NFU Scotland’s team of secret shoppers this week found 100 percent commitment to British or Scottish lamb on their shelves. A quick look at butchers’ shops around the country also found tremendous support for locally produced lamb.

Given that butchers and some major retailers are fully committed to home-produced lamb at the height of the season, Scottish farmers are justified in their demands that Tesco and Asda should follow suit.

NFU Scotland’s Livestock Policy Manager John Sleigh, part of this week’s secret shopper team, said:“This is the time of year when Scottish lamb is at its tastiest and represents the best value for shoppers. So why on earth are Tesco and Asda buying and shipping in out-of-season lamb from the Southern Hemisphere to fill up its shelves?

“In the case of Tesco, what makes that policy more difficult to take is that, earlier in the year, it publicly stated its commitment to bringing its food sourcing policy closer to home!”

“Our shelf watch campaign shows that local butchers and other major retailers can, and do, show 100 percent commitment to Scottish or British product at this time of year. Scottish farmers are glad of such tremendous support and rightly challenge Tesco and Asda to follow suit.

“Scottish farmers are not naive in the way the market works and fully accept that at some points of the year it may be necessary to have some imported product on the shelf to ensure those looking for lamb can be satisfied.

“However, this is peak season, the Scottish marketing campaign ‘Wham, Bam, Thank You Lamb’ is in full swing and those working hard to produce some of the best lamb in the world rightly demand more from these two major supermarkets.”