The 2013 Meat Industry Awards ceremony once again brought the top names of the industry together in Birmingham to celebrate excellence and reward the best, as voted for by readers of Meat Management magazine and judged by industry experts. 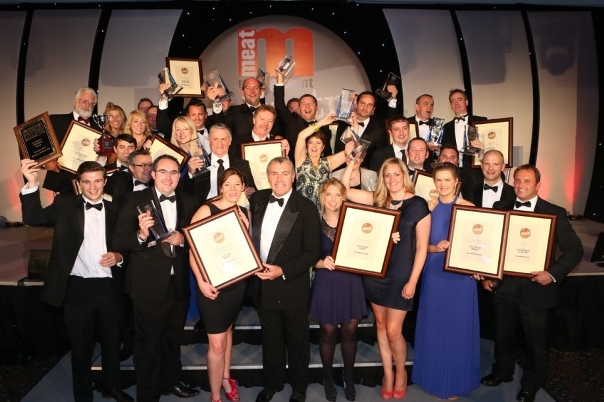 The 2013 Meat Management Award winners are all smiles after being recognised as the best in the industry.

Winners included ASDA, which retained its Multiple Meat Retailer of the Year award; Wilsons of Crossgates was named Britain’s Best Butchers Shop; while the Manufacturer of the Year Award went to Hull-based Cranswick Plc.

The annual event was heralded as a resounding success with almost 450 guests attending an excellent evening at the Hilton Birmingham Metropole Hotel to network and celebrate the winning companies, products and organisations.

The results for all 16 award categories were announced, with special footballing guest and record England appearance holder, Peter Shilton on hand to present the prizes and certificates.

The annual event was sponsored by major meat promotional bodies and industry suppliers operating in the UK including: EBLEX, BPEX, Hybu Cig Cymru/Meat Promotion Wales, the Meat Training Council, Marel, Reiser and many other top companies and organisations.

The winners of each of the three individual red meat categories went head to head to find the overall red meat champion. The Cook with M&S Teriyaki Steak Strips from Marks & Spencer and Dawn Meats UK was judged to be the very best.

The Excellence Award is presented annually at the ceremony to an individual who has made an outstanding contribution to the UK meat industry. The recipient of this year’s award is Jim Dobson OBE, the group managing director of Dunbia, a multi-national manufacturing specialist and product innovator he founded in 1976.

The awards ceremony was also used as a platform by trade body EBLEX, which crowned England’s Best Steak Pie. Turner’s Pies in West Sussex received the nod for its tasty Steak & Stilton Pie. Over 100 beef, lamb, mutton and veal steak pies were entered by butchers, caterers and manufacturers in two categories: retail and foodservice.

Turner’s Pies won the retail award and overall competition, with Dunkleys, a manufacturer from Wellingborough in Northamptonshire winning the foodservice category with its Ashdale Blade of Beef and Malbec Pie.