Perth butcher Beaton Lindsay has been given the title of president of the Scottish Federation of Meat Traders. Beaton will be the third generation of his family to have worn the presidential chain.

He follows his grandfather, also Beaton, who was president from 1966 to 67 and his father David who was president in 1988. Beaton is the third generation of the Lindsay family to be proposed for the position of president of the Federation. 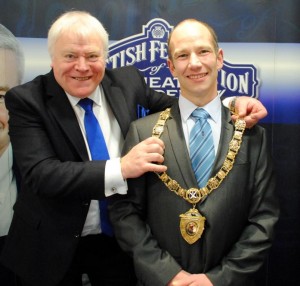 Past president Ian Faulds places the chain around the neck of new president Beaton Lindsay.

Beaton attended Perth Academy, he is married to Louise and they have two daughters Olivia aged 13 and Lola aged 9. Away from work Beaton has an interest in motor bikes, white water kayaking all over Scotland and skiing.

Lindsays is a family butcher established in Perth in 1863, and for those 150 years has been run by successive generations of the Lindsay family down to Beaton today.

Mr Lindsay has served as membership convenor since 2007 when he took over from his father.