Hot on the heels of BPEX’s newly announced campaign Tulip Ltd has developed a pulled pork product which it hopes will bring a real point of difference to the traditional canned meat category. The product is manufactured in Denmark by Danish Crown, Tulip’s parent company, and is believed to be the only canned pulled pork product currently available in the UK. 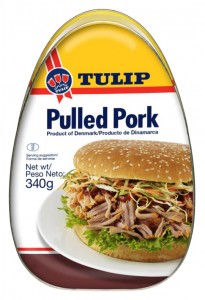 “Consumers are becoming increasingly aware that buying canned produce doesn’t necessarily have to mean a compromise on quality or taste. The sector has been notoriously slow to introduce new and exciting offerings, based mainly on the perception that sales would predominantly consist of the usual staples.

“We however believe that given the versatility and convenience, combined with a relatively low purchase price, our pulled pork will attract a whole new generation of shoppers to the category and will add some much needed value growth.”