The Traditional Farmfresh Turkey Association (TFTA), a group of 50 independent farmers across the UK is celebrating its 30th anniversary in a variety of ways to mark its formation in 1984.

The group of farmers produces in excess of 165,000 high welfare turkeys, specifically for the festive season. 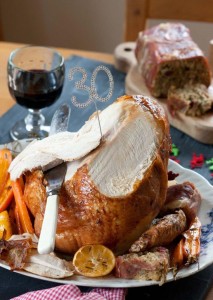 To celebrate their 30-year anniversary the association has teamed up with TV Chef Rachel Green and photographer Michael Powell to produce a batch of new recipes, including a Roasted Turkey Crown with Parma Ham, Sausage, Almond and Fig Loaf.

Golden Turkeys are raised on local feed and grown to full maturity and to the highest welfare standards, dry plucked, usually by hand and then hung like a game bird for at least seven days. The turkeys are produced in keeping with proven traditional practice to ensure a good texture and flavour.