The 2013 winners of the Universities Federation for Animal Welfare (UFAW) Medal for Outstanding Contributions to Animal Welfare Science were presented with their awards at the Federation’s International Symposium ‘Science in the Service of Animal Welfare: Priorities around the world’ held in Barcelona. A commemorative medal and £3,000 was presented to Professor John Webster and to Professor Peter Sandøe who both have been very influential in the development of animal welfare science internationally. 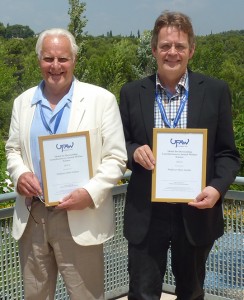 Professor John Webster (left) and Professor Peter Sandøe who each were awarded a
UFAW Medal at the UFAW International Symposium in Barcelona.

The UFAW Medal recognises exceptional achievements of individual scientists who have made fundamental contributions to the advancement of animal welfare over a number of years. The award is open to individuals, anywhere in the world, whose research, teaching, service and advocacy has significantly benefited the welfare of animals.

John Webster is Professor Emeritus at the University of Bristol School of Veterinary Science. Soon after his appointment to the Chair of Animal Husbandry at Bristol in 1977, he established a unit for the study of behaviour and welfare. This has grown into what is today a major international centre of expertise – the Animal Behaviour and Welfare Science Group. As a founder member of the Farm Animal Welfare Council, it was John who first propounded the 5 Freedoms – a concept that has had a worldwide influence on standards for, and approaches to the assessment of, the welfare of domesticated animals. He has published many papers on aspects of animal welfare science and the subjects to which he has made important contributions include cattle lameness and welfare assessment methods. He has published several books in the field including two in the UFAW/ Wiley Blackwell series: ‘Animal Welfare: limping towards Eden’ and ‘Management and Welfare of Farm Animals’. Among other responsibilities he has been president of the Nutrition Society and President of the British Society for Animal Science.

Peter Sandøe is Professor of Bioethics in the Department of Large Animal Sciences and Department of Food and Resource Economics at the University of Copenhagen. He is also Director of the Danish Centre for Bioethics and Risk Assessment. Over the past two decades he has established himself in a unique position in the academic study, university teaching and public discussion of animal welfare and animal ethics. In his interdisciplinary work with animal welfare researchers, veterinarians and animal scientists, he has used his expertise in philosophy to ensure that critical questions of ethical relevance are asked and appropriately analysed. He has published many influential papers, many textbook chapters and web-based teaching materials, and his expertise, clarity of thought and wisdom is widely sought.

His main contribution to research falls within the following four areas: understanding the interface between animal ethics and animal welfare science; analysing the special ethical issues raised by animal biotechnology; the effects of farm animal breeding on animal welfare; and assessment of animal welfare at farm and group level.

UFAW awarded this special medal to Professor Peter Sandøe in recognition of his exceptional achievements through his fundamental contributions, as an ethicist and working with other animal welfare scientists, to the advancement of animal welfare and animal welfare science. His research and teaching has had international impact and significantly benefited the welfare of animals.