Scottish pig producers are facing some challenging times as the industry goes through a period of adjustment following the cessation of pig slaughtering at Vion’s Hall’s of Broxburn site almost one month ago.

Producers will, however, be taking heart from an improvement of around 1% in pig prices over the past month, putting them around 9% above this time last year, according to Stuart Ashworth, Quality Meat Scotland’s head of economics services.

“This is particularly pleasing when compared to pig producers in the major European pig producing countries who have seen prices slide by about 3% over the same period. 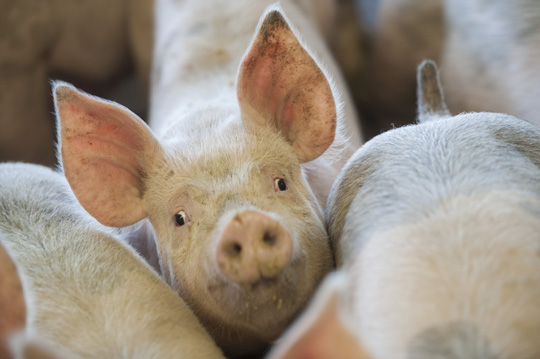 The medium term outlook for the pig sector is one of tight supplies, giving the producer a position of strength in the marketplace.

“This has created a significant turnaround in the position of Scottish prices in contrast to European prices. Scottish prices now stand 8% above the EU average compared to 1% below in mid-October. The down side on this, of course, is that it makes European product more competitive in the UK market,” said Mr Ashworth.

The other pleasing development for pig producers is that prices have improved at the same time as a modest increase in UK prime pig slaughter numbers has occurred.

“Some retailers are saying they are recognising the increased cost of feed in their pricing policies,” added Ashworth. “There is also the prospect that the demand for pigmeat is improving and that worries over reduced European production in 2013 may be encouraging retailer recognition of a need to secure UK production.”

A closer look at the European price also suggests an underlying strength in the pig sector, he observed.

“The modest decline in European prices over the past month still leaves European prices almost 20% higher than this time last year. Data on production is lagging for many member states but the data that is available shows declines among major pig producers.

“For example during September German production was 8% lower than last year while Denmark and France show declines of more than 10% in the same month.”

These falls are greater than the European Commission’s own forecast which show a decline in EU-27 production in the final quarter of 2012 and the first quarter of 2013 of 1.5%.

“Whichever way we look at it, the medium term outlook for the pig sector is one of tight supplies giving the producer a position of strength in the market place. Pig producers will also be pleased to see some of the heat coming out of the international protein and grain market,” added Ashworth.

The latest International Grains Council market reports soyabean prices down 7% over the past month following better than anticipated US yields and slower export demand along with the prospect of higher yields in South America.

At current levels, soyabean futures are about 15-20% off the July peaks. In contrast wheat prices are reported to be 1% higher over the month as global estimates of wheat production are put at a 6% year-on-year decline although upward pressure has eased as the Black Sea exporters seem to be more willing to trade than had been hinted at earlier in the year.