Wales is the latest nation to join the World Butchers’ Challenge, with their national squad – Craft Butchery Team Wales, signing up to compete in Sacramento, California next September.

Informally known as the Olympics of Butchery, the World Butchers’ Challenge pitches teams from around the world in a three-hour, 15-minute marathon cutting test to crown the world’s best. 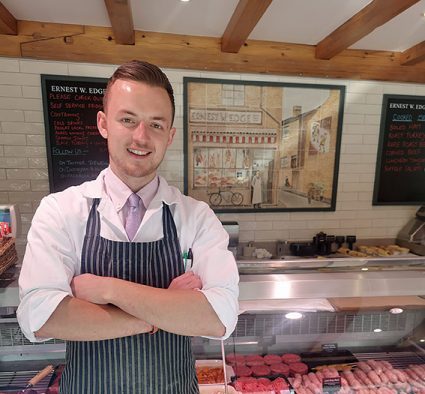 Team captain, Peter Rushforth from Ernest W. Edge and Son, Handbridge, Chester in the UK, a former winner of Butchery WorldSkills UK and Welsh Butcher of the Year competitions, is looking forward to the challenge ahead.

“The World Butchers’ Challenge has quickly become touted as the one to win. Like any professional, you want to be pushing yourself to get better and this competition offers butchers the chance to pit their skills against the best of the best.

“We’re a young team entering the competition for the first time however, we’ve been selected based on our performances across competitions here in Wales so there is plenty of experience amongst us. Make no mistake, we’re going there to win, just look at the Irish team last year who were first time entrants and ended up winning the title.”

The World Butchers’ Challenge, a biennial event which started out as a Trans-Tasman Test Match between Australia and New Zealand in 2011, will head to the iconic Golden 1 Center in the Californian city of Sacramento on 4th and 5th September, 2020.

Once there, the Craft Butchery Team Wales along with fifteen other nations will be tasked with slicing up a side of beef (half a carcass), a side of pork (half a carcass), a whole lamb and five chickens to produce a themed display of value-added products to battle out for the world champion crown and take home the Friedr. Dick Golden Knife Trophy.

A global panel of judges will then score each display based on strict criteria that includes; knife skills, hygiene, safety, consistency, time management, cookability & saleability as well as style, visual impact and innovation of the display.

New Zealander Rod Slater, World Butchers’ Challenge founder and Chairman of the Organising Committee, is credited with coming up with the original concept of the Trans-Tasman Test Match. Alongside Ashley Gray, World Butchers’ Challenge CEO, they have driven, in just a few years, what was an industry-facing event into an international phenomenon attracting world-wide media coverage and record sponsorships.

Slater remarked on the latest addition to the team line up: “We’re delighted the Craft Butchery Team Wales will be joining us in Sacramento next September. I am constantly amazed at the scale this competition has grown to – almost every continent will be represented next year.“There is so much passion for the trade from across the world. To think how this competition has grown from a small conference room in Christchurch, New Zealand to an arena which is usually home to the Sacramento Kings and global music megastars is remarkable.”

The World Butchers’ Challenge will take place on 4th and 5th September 2020 at the Golden 1 Centre, Sacramento. For more information head to worldbutcherschallenge.com