The world’s press will be dining on Welsh Lamb and Welsh Beef during the Wales NATO Summit in Newport.

More than 1,500 journalists from across the globe have registered to attend the historic summit, featuring the Western world’s most powerful political leaders, at the Celtic Manor Resort on September 4th-5th.

A reception will be held for journalists at Tredegar House featuring the finest Welsh food as well as entertainment by leading Welsh artists. 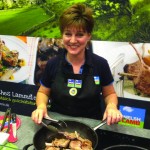 Elwen Roberts of HCC who will be cooking Welsh Lamb and Welsh Beef for the world’s media during the NATO summit.

Welsh Lamb and Welsh Beef will form the centrepiece of a buffet to be served to the journalists, courtesy of Hybu Cig Cymru – Meat Promotion Wales who are supplying all the meat.

HCC’s Consumer Executive Elwen Roberts will also give cooking demonstrations and will hand out samples of Welsh Lamb and Welsh Beef dishes for journalists to taste.

“This is an excellent opportunity to showcase the best of Welsh food, in particular Welsh Lamb and Welsh Beef, to an influential international audience,” said HCC Chief Executive Gwyn Howells.

“There has never been so many influential international journalists visiting Wales at the same time, and this presents us with a once in a lifetime opportunity to show off what a wonderful country this is and the wide range of quality foods that we have to offer.”

Elwen Roberts conducts HCC’s cooking demonstrations at the Royal Welsh Show as well as at trade events across the world. She also has a regular cookery spot on S4C’s Prynhawn Da magazine programme.

“This is an exciting event and I am looking forward to discussing the qualities of Welsh Lamb and Welsh Beef with reporters from across the world,” said Elwen. “I know from attending trade shows across Europe that there is a huge amount of interest in our environmentally friendly methods of meat production and the high animal welfare standards we have here in Wales.”

Welsh Lamb and Welsh Beef is a big export earner for Wales. In 2013, overseas sales amounted to more than £224 million, with new territories such as Scandinavia and Canada growing year on year.

A feast of music, poetry and red meat from Wales
Scots say positive environmental message about the industry is vital