Farming minister David Heath has been answering questions from the next generation of UK poultry farmers. 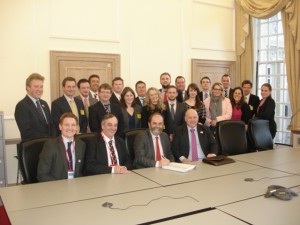 Members of the NFU’s and ABN’s Poultry Industry Programme spent a day in London to learn more about how the industry lobbies Government and then they were able to sit down with Heath to ask him more about how his work can have an impact on their businesses.

NFU poultry adviser Chris Dickinson said: “This scheme has been hugely successful and has been embraced by the young farmers, who we hope will become some of the industry’s future leaders.

“This particular day was all about learning the role of Government in farming policy and they all took the opportunity to ask the minister probing questions about his work and how it affects their personal interests including blackhead in turkeys and poultry litter burning.”

The 19 participants, who come from across the UK, met at the NFU office in London and the morning begun with them being given training on lobbying. They were then given a presentation from Paul Rooke from AIC on feed lobbying before being given a guided tour around the Houses of Parliament.

The afternoon session began with a presentation from Dan Gauntlett from AHVLA who outlined the procedures that occur in the event of a notifiable disease outbreak before meeting with the minister.