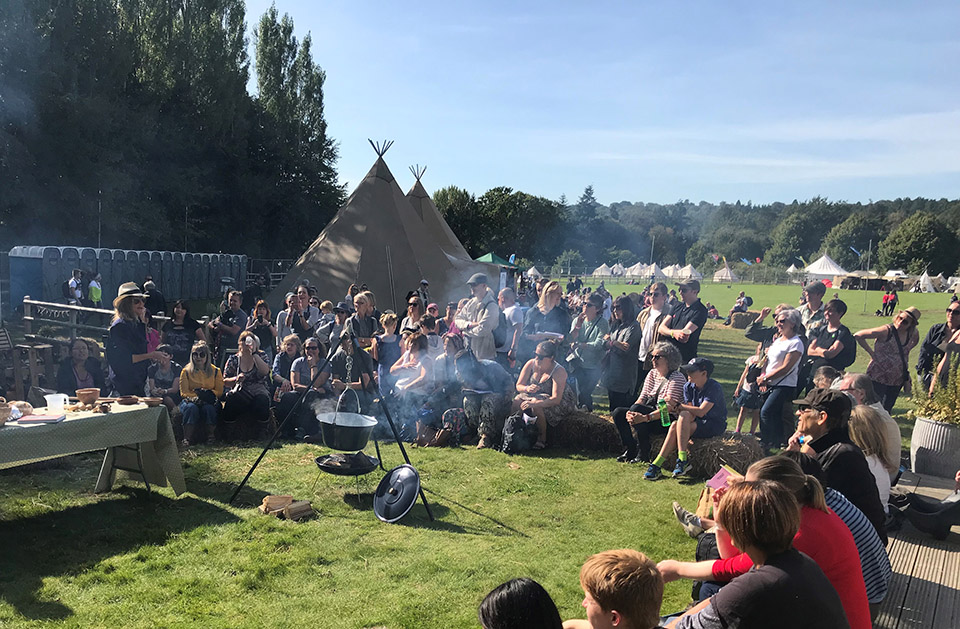 Cerys Matthews helps prepare the cawl at the Welsh Lamb and Welsh Beef celebration at the Good Live Experience.

“We made thousands of visitors very happy with endless samples of Welsh Lamb and Beef dishes during the four-day event,” said Medi Jones-Jackson, HCC’s events executive. “The response to the meat was amazing, the produce did not fail to impress. Our mobile kitchen was placed next to HCC’s Lambassador, Chris Roberts and his Welsh Lamb asado grill which also drew in the crowds.”

Another attraction, led by Cerys Matthews, was a Welsh Lamb cawl cooking demonstration, which wasleft to bubble over an open fire. The audience were eager to taste the traditional Welsh broth which was a hit with young and old.

One of the main highlights of the weekend was a feast prepared by Chris; a one-off celebration of Welsh Lamb and Welsh Beef for 60 lucky ticket-holders. The menu for the exclusive dinner included some of the social media sensation’s specialities such as fire ‘infiernillo’ salt crust Welsh Lamb shoulders and bone marrow flame basted Welsh Beef tomahawk steaks with copious amounts of his signature ‘Sexy Rub’ seasoning!

HCC’s Medi added: “As part of our UK marketing drive over the summer months, we have attended one consumer event after another. These have included the Royal Welsh Show, BBC’s Countryfile Live, Anglesey Show, and a tour of supermarket stores.”