“You can learn a huge amount by seeing your slaughtered cattle hanging up and being graded.” This was the verdict of Kintyre monitor farmer, Duncan Macalister, after he and members of the monitor farm community group visited the Scotbeef abattoir at Bridge of Allan, near Stirling. 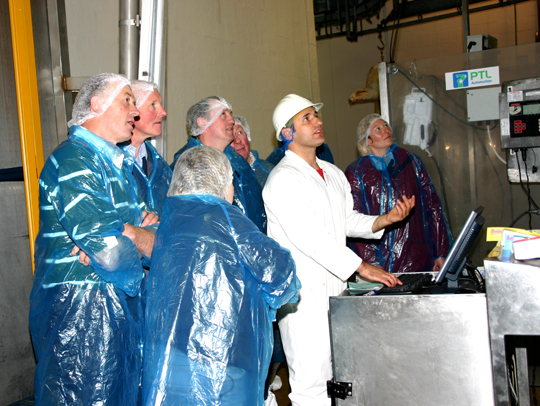 Grader Peter Donaldson (in white) explaining grading to the group.

Mr Macalister runs a breeding herd of 140 predominantly Aberdeen Angus cross cows on Glenbarr Farms, his 1,730 acre (700 ha) unit, located just north of Campbeltown on the western coast of the Kintyre Peninsula. Glenbarr is one of the network of Quality Meat Scotland (QMS) monitor farms throughout Scotland.

With almost year-round grass growth in normal years and 120 acres of barley, Mr Macalister is able to finish almost all the progeny, other than retained heifers and a few bullocks sold store when the store cattle trade is buoyant. Finished cattle are sold to Scotbeef, who pay a significant premium for Aberdeen Angus genetics.

During the recent monitor farm abattoir visit, Mr Macalister and the community group were able to closely observe each process as the 16 Glenbarr bullocks were progressed from slaughter, right through to the 32 sides being H-bone suspended immediately prior to entering the chill.

Aberdeen Angus bulls had been used exclusively at Glenbarr until 2011, when Mr Macalister purchased a Hereford bull to use over some of the Aberdeen Angus cross females. This was the first step to developing rotational Hereford/Aberdeen-Angus cross replacement heifers – known as “Black Baldies”. A second Hereford bull was purchased earlier this year.

One Hereford cross steer was included in the recent Glenbarr consignment of 16 to Scotbeef. The other 15 were all Aberdeen Angus sired, with all but one being 75% Aberdeen Angus.

The day before they were slaughtered, Mr Macalister weighed them (empty for the journey) individually, and listed the ear tag number, liveweight and date of birth for each one. This information enabled the group to calculate and compare the killing out percentages plus the daily liveweight and daily deadweight gains of the 16 cattle.

“At an earlier monitor farm meeting, we had discussed using cattle electronic identification to record a wide range of information about individual animals, in particular the type of things I need to know to help accurately identify the consistently better breeding males and females, to guide herd replacement selection,” explained Mr Macalister. “Figures for things like live and deadweight gain, and killing out percentages from my finished cattle will be a big part of this process.”

Analysis of the live and carcase figures revealed the youngest bullock had the best daily liveweight gain – 1.15 kg/day (assuming zero birth weight), and best daily deadweight gain – 0.64 kg/day. Despite being the youngest, he yielded the fifth heaviest carcase at 322.5 kgs.

“That was an excellent experience,” commented Mr Macalister. “To be able to see and learn which were the good and not so good areas on my own cattle, and be able to discuss the carcases with the grader, was a fantastic opportunity.

“I had thought my cattle were fatter than they actually were (two were fat grade 3, 12 were 4L and two were 4H), which tempts me to think I could have taken them on to heavier weights, but at this time of the year, would the cost of putting additional weight on these particular cattle be worth it? Another option for future years would be to push them more while they are at grass.

“Seeing the carcases and knowing the cattle, gives me some solid information to help me decide how to manage the cattle in the future. Something else we learnt at Scotbeef was that the ear tags, which can cause us farmers grief, are just the first step. Watching the Scotbeef traceability system in operation, including DNA sampling of individual carcases, was a real eye opener, and made us realise just how precise Scotch Beef traceability is.”

Scotbeef had advised Mr Macalister that there had been evidence of liver fluke in a group of ten finished bullocks he had sent in early October. Of the 16 bullocks observed by the group during their visit, 13 also showed signs of active fluke.

“This kind of information is really useful,” commented Mr Macalister. “The remainder of the finishing cattle are now housed for winter, and thanks to receiving this fluke alert, we know that it is an issue, so can make informed decisions as how to treat the cattle.”