AIMS, the UK trade association which represents the majority of abattoirs, has said it was amazed to hear that the previous Agriculture Minister, George Eustice, now believes that stunning immediately after the cut in religious slaughter should be encouraged to mitigate the adverse effects of slaughter without stunning. 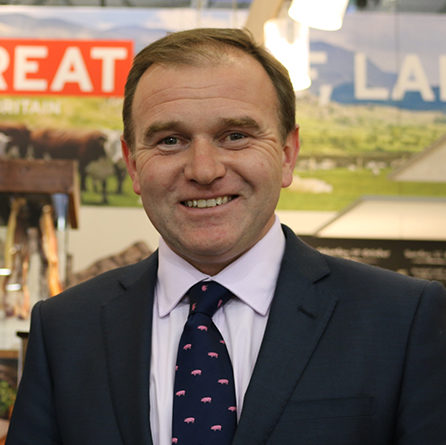 Eustice made his comments during a Westminster Hall debate, which took place last Tuesday.

In a statement, issued by the organisation AIMS said: “Whilst AIMS says it entirely agrees with the principle, it emphasises that a number of large Halal slaughterers have been wanting to adopt this practice for many years but were actively prevented from doing so by Defra while Mr Eustice was in office. Defra, in its collective wisdom, insisted that the ‘20 second rule’ (1) must be applied to a completely unconscious sheep after stunning, preventing further movement along the line. If the 20 second rule is still applied, there is no benefit to the slaughterer, no advantage over simply not stunning at all, which is why no abattoir currently does it for sheep.

“To apply the 20 second rule to an unconscious animal is not merely irrational but ludicrous. Post-cut stun was widely practiced until Defra applied its own interpretation and so it ceased immediately. Defra in effect abolished post-cut stunning of sheep. In addition, if post-cut stunning is reintroduced, there would be no reason for Defra to prevent groups of sheep flowing together voluntarily into the restrainer for slaughter, the age-old humane method followed for all other stunned sheep. At present, Defra insists that sheep, which are not to be stunned, are separated from their flock mates and forced into the restrainer alone, a very cruel practice which the meat industry deplores.

“This substantial welfare improvement could be introduced immediately because it is only precluded by Defra’s misinterpretation of the legislation and millions of sheep would benefit at once. To be clear and unequivocal, many abattoirs want to post-cut stun, but Defra has prevented them by a perverse interpretation of the law, which removes any welfare or commercial benefit.

“AIMS however, is even more amazed that Mr Eustice did not promote the single greatest potential advance in slaughter welfare when he had the opportunity. Halal slaughterers In Australia and New Zealand and most other countries are permitted to demonstrate to their Muslim customers that sheep are alive and unharmed by electrical stunning and are thus eligible as Halal. This is accomplished by very occasional demonstrations of recovery after stunning, under official veterinary supervision. The facility to demonstrate that its method is Halal gives New Zealand abattoirs access to most of the Muslim world with stunned sheep meat. Defra absolutely prohibits demonstrations of recovery to prove that stunned sheep are potentially Halal in the UK, using a perverse interpretation of legislation governing laboratory animal experiments, not legitimately applicable to food marketing and improved animal welfare.

“If recovery from electrical stunning can be demonstrated in the UK, then acceptance and thus demand for such stunned Halal meat here will expand significantly. It is completely unreasonable to expect Muslim consumers to trust officials when they say that electrical stunning does not kill or harm sheep. They are entitled to see it with their own eyes.

“AIMS is therefore surprised that a former Defra minister alleges he wishes to reduce slaughter without any stunning when Defra policy has been the major influence on increasing the proportion of sheep not stunned, placing those who wish to stun at a large commercial disadvantage against those who do not stun.”