The Royal Welsh Show was the setting for the 2012 ASDA LambLink competition, which saw the very best Welsh lamb cooked before being judged by an expert panel.

Welsh lamb leg steaks were the product which came under the spotlight, produced on farms supplying the ASDA LambLink scheme. Having been cooked, the steaks were tasted and scored by the panel led by celebrity chef, Dudley Newbery. The judges commented on the tenderness, taste and succulence of the Welsh lamb.

Alun Davies (AM), the Welsh Deputy Minister for Agriculture, Food, Fisheries and European Programmes, presented the prizes. The Deputy Minister congratulated ASDA and Welsh Country Foods for their support in promoting Welsh lamb. He encouraged ASDA to further develop the marketing of Welsh lamb processed through Welsh Country Foods and stressed that the quality and integrity of Welsh lamb will deliver a fantastic product for its customers. His praise of the Welsh sheep industry, and the role it plays in the Welsh rural economy, was appreciated by the assembled crowd of farmers and industry leaders. Jim Viggars, head red meat trader for ASDA, was similarly impressed and full of praise for the Welsh farmers who are part of the ASDA LambLink scheme. 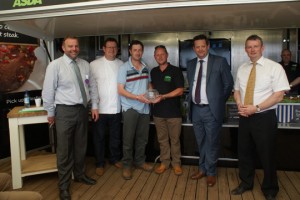 The details of the prize winners are listed below: