Aubrey Allen, the chef’s butcher based in Coventry is celebrating its highest and most privileged honour by receiving the Royal Warrant to HM The Queen, as suppliers of meat, poultry and game.

The official Royal Appointment has resulted from Aubrey Allen supplying the Royal Household at Buckingham Palace, Windsor Castle, Sandringham and Her Majesty’s other private residences, with its wide range of meats, poultry and game products since 2007. 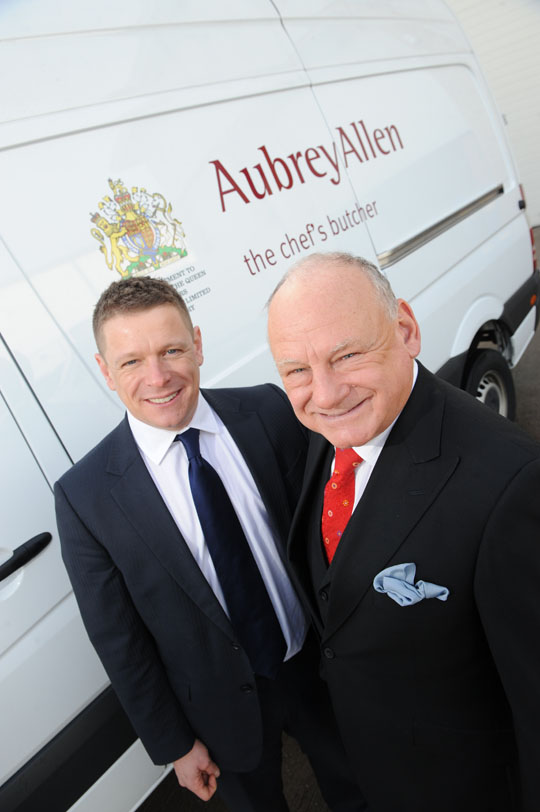 L-R: A very proud Russell and Peter Allen with their Royal Warrant.

The Warrant has taken effect from 1st January 2013 and has been granted for a five year period. The family run butchery business joins around 800 other Royal Warrant holders who are united by their commitment to the highest standards of service, quality and excellence.

Russell Allen, managing director of Aubrey Allen, said: “It is the ultimate honour to be awarded a Royal Warrant and represents the most prestigious stamp of quality and reliability.

“Being granted the Royal Warrant in the year that marks the 60th anniversary of HM The Queen’s Coronation is particularly special, with the opportunity to be involved in the Coronation Festival at Buckingham Palace from 11th–14th July 2013. We’re absolutely thrilled and delighted to receive this recognition at the start of such a special year, which also marks our 80th birthday celebrations for the business that my grandfather Aubrey Allen founded in 1933.

“Receiving the Royal Warrant represents a time of celebration for everyone who works across the company and highlights a very special landmark in the history of the company for my father Peter, my sisters Debbie and Lucianne and myself.

“Our relationship with the Royal Household goes way beyond the last five years and in fact back to our first involvement with the Royal Show held at Stoneleigh Park in 1989. We have also been supplying HRH The Prince of Wales for the last two years and have developed close links with HRH The Princess Royal and her butcher who is a Master of the Worshipful Company of Butchers”, he added.

Playing a key role and making those initial royal connections become reality is down to Simon Smith, Aubrey Allen’s Sales Manager who first approached the Royal Chef, Mark Flanagan MVO back in March 2007.

After supplying a range of sample products in April 2007 the rest, as they say, is history. Since then, Simon has had the honour and pleasure of working with the Royal Chef on a day to day basis, providing advice and personally managing the Royal account.

The Royal Chef who manages a team of 30 staff, including 21 chefs, has also visited Aubrey Allen’s shop and delicatessen in Leamington Spa, and last year, Simon Smith and Bob Spring, Aubrey Allen’s head butcher, held a Meat Masterclass for the Royal Chef and his team at Buckingham Palace.

Commenting on the official Royal Appointment, Simon Smith said: “Being awarded the right to display Her Majesty’s Coat of Arms represents a lifetime goal and the greatest accolade of our industry. For Aubrey Allen to receive the Royal Warrant also marks a fantastic tribute to the whole team in Coventry and Warwickshire, underlining the consistent quality of our meat and meat products.

“It’s a huge privilege to have had the opportunity to be personally involved in the catering of so many high profile events for the Royal Family over the last five years”, he added.

Royal Warrants are a mark of recognition to individuals or companies who have regularly supplied goods or services to certain members of the Royal Family for a minimum of five years.