A ‘Pork and Apple Burger’ from Robin Maycock Family Butchers in Holloway was the star of the Pork Product Excellence Awards and BPEX Roadshow in the East Midlands. Maycocks won the Pork Burger category and clinching the acclaimed Overall Champion title for the region. 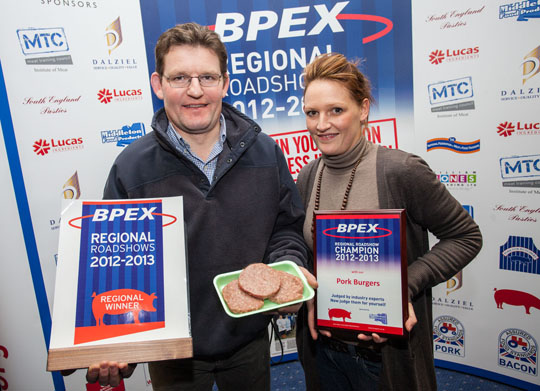 The Maycock shop, which is one of only a handful in the country still to have its own abattoir, was established in 1850 and taken over by the Maycock family in 1977.

For siblings Jonathan and Emily Maycock, the triumph came as a real surprise. Jonathan said: “I can’t believe our burger was judged the best pork product in the East Midlands. We know it is a great recipe, but to stand out against so many excellent entries is really quite fantastic!

“Entering competitions and evaluation events is a tradition started by our parents and one which we try to continue – although we’d like to do more of them, particularly when we do so well!”

It was a double delight for Uncle Henry’s Farm Shop, where husband and wife team Barry and Louise Jarvis added to their awards collection with five gold, two silver and two category champion titles to boot. Louise said: “It is always nice to come away with gold but to get the champion titles is fantastic. They’ve gone up on the wall straight away.”

They triumphed in the speciality pork product category with a ‘Rustic Pork Terrine’ and the ready meal category with ‘Farmers Pork in Mustard’, as made by cook Jo Leggett. Louise said: “The terrine is made to a traditional brawn recipe that was given to us by an old fashioned butcher. It contains pork hocks, stock and seasoned with sage and black pepper – there is absolutely nothing artificial included. The Ready Meal is one of a range of about eight that we now have for sale and has been entered into the awards on a number of occasions and which Jo has tweaked taking it from a silver award to gold and then the Champion title based on the judges’ feedback. It is also one of our ‘gluten free’ products.

“It is a lot of work entering these events but we keep coming back as the rewards and recognition are more than worth it.”

Also celebrating was apprentice butcher James Pritty of E.W. Coates of Matlock, who despite only joining the trade in April 2012 was crowned Champion Young Sausage Maker. The 17 year old butcher, who joined Coates as part of the MEAT Ipswich Apprenticeship Scheme, was praised by judges who couldn’t fault his ‘Pork with Spring Onion and Ginger Sausage.’

James said: “I’m really enjoying it and my favourite job is sausage-making. It’s an established recipe but I’ve learnt how to make it just right. I thought it would do OK at the roadshow but was really quite surprised to win. The award is on display on the counter and gives me real incentive to continue to improve.”

Nick Coates, who is the fifth generation to run the shop alongside wife Tanya, is particularly proud of James. He said: “He has really taken to butchery and come on in leaps and bounds when you consider he has no prior training and only been making sausages for the last six weeks!”

BPEX butchery and product development manager, Keith Fisher, said: “This was another successful stop in the region, which saw butchers venture out in some quite harsh weather conditions. But it proved to be worth it as from the 114 entries, 111 picked up an award – two thirds of which were gold. We had some exemplary products and were delighted to welcome and reward new talent to the event, including our newest Young Sausage Maker, James Pritty. He has demonstrated what a little bit of hard work and talent can achieve.”

The next stop on the BPEX 2012/2013 Roadshow is in the North East. Butchers in the region are invited to browse trade stands and enter the product evaluation at the Great Yorkshire Showground, Harrogate on Wednesday 30 January 2013. Entry forms and guidelines can be downloaded here.