The British Poultry Council has handed out 15 scholarships to scholars at Harper Adams University.

The recipients received their awards during the university’s annual Development Trust Scholarship Presentation, which was held earlier this week in the Queen Mother Hall on campus. 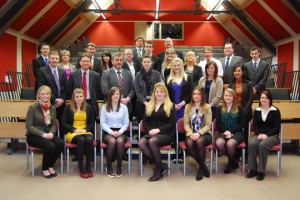 15 scholars received their awards at Harper Adams University’s annual Development Trust Scholarship Presentation, which was held in the Queen Mother Hall on campus.

Before the official presentation, all recipients of British Poultry Council scholarships, who will receive two payments of £3,500 over two academic years, met with their sponsors at a lunchtime reception in the university’s Regional Food Academy.

The British Poultry Council is aiming to encourage more young adults into the Poultry sector and as such offered the scholarships to second year degree students and first year FdSc students studying agriculture and food production. A condition of the scholarship is that the recipient must undertake their placement year with the awarding firm.

John Reed, chairman of the British Poultry Council said: “I’m delighted to be here today with our young scholars. The British poultry industry is committed to investing in people; we want to recruit and train the new generation of poultry people and I’m confident many scholars will develop a successful career in poultry. Our on-going collaboration with Harper Adams University will help foster skills and talents and ensure a bright future for the industry.”

One of the recipients was Samantha Glew, from Nottingham, who is studying BSc/BSc Honours Bioveterinary Science and was awarded a British Poultry Council Scholarship from Aviagen. The 20-year-old said: “I would to thank Aviagen Ltd for the opportunity that I have been given to work with them for my placement year. I am extremely excited about the potential to work abroad, explore the company and expand my knowledge and experience to an extent I hadn’t imagined I would be doing so during placement.”

Matthew Morrow, from Aughnacloy, County Tyrone, Northern Ireland, is studying an FdSc in Agriculture and was awarded a British Poultry Scholarship by Bernard Matthews Foods. The 18-year-old said: “I am delighted to gain a scholarship with Bernard Matthews. This has allowed me the opportunity to gain experience in a modern and progressive company in an industry that is constantly developing. The scholarship funds have reduced financial stress and will allow me to concentrate more on my course and develop the skills for a successful career in the Poultry industry.”