Scan Foods UK has won the BPEX Foodservice Sausage of the Year Final with its Premium Pork Sausage with Chorizo and Olive Oil.

Product development manager of Scan Foods, Ray Stannard said he felt, “absolutely elated” with the win. Ray added: “It’s a good sausage, and it’s healthy because of the olive oil.”

Sausages provided by Scan Foods are approximately 30 per cent lower in saturated fat than standard premium pork sausages, and 80 per cent meat content. 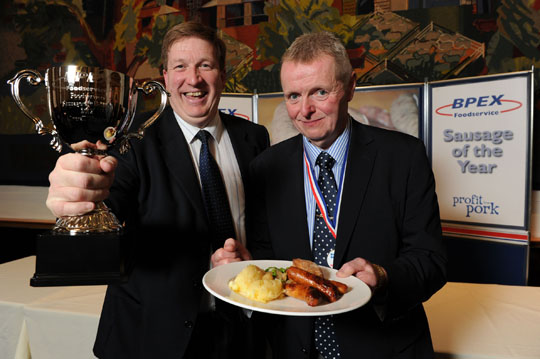 The 15 competing sausages were judged on appearance, splitting, texture, juiciness, and taste/smell.

Producers, industry experts, and the press were on-hand to judge this year’s finalists, with five category winners and an overall champion.

Roy Anderson, commercial director for Vion Food UK Ltd, one of the judges in attendance, expressed the importance of “appearance, succulence and texture,” adding that in his opinion, “the sausage that meets all the criteria is the pork and leek” from category five.

With standards extremely high, there were only two decimal points between the overall winner and the runner up.

BPEX development manager, Keith Fisher awarded every contestant with a certificate and a plaque.

The full entries and results were:

And there will be more focus on the sausage sector, when the annual British Sausage Week runs from the 5th to 11th November, including competitions, and an appearance from 2012 celebrity supporter, Al Murray.