BPEX is gearing up for a very special season of roadshows – its tenth anniversary tour!

The 2013-2014 line up of events will hit the road from September 2013, where butchers and local pork producers can showcase their products, network and review the latest developments from a host of trade exhibitors. 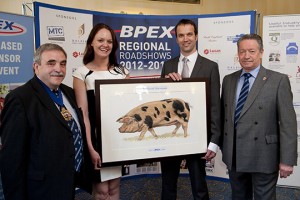 The roadshow will be stopping at six venues with some of the industry’s most respected judges in tow, who will be looking for outstanding sausages, mouth-watering pies and a range of other quality pork and pork meat products. The dates/venues are:

BPEX butchery and product development manager, Keith Fisher, said: “The 10th anniversary of the Regional Roadshow and Product Excellence Events is a real milestone and recognises the continued success of the event year on year. To date, our judges have put more than 11,000 products to the test!

“Not only is it an excellent opportunity for butchers to gain some of the highest recognition for their pork products, they can meet fellow producers and industry representatives, and pick up new ideas.”

NEW FOR 2013! Enter online at www.bpexentries.co.uk/roadshows