The Agriculture and Horticulture Development Board (AHDB) has declared ‘Mission Successful’ on returning from a five-day visit to the Dominican Republic – the largest economy in the Caribbean and Central American region. 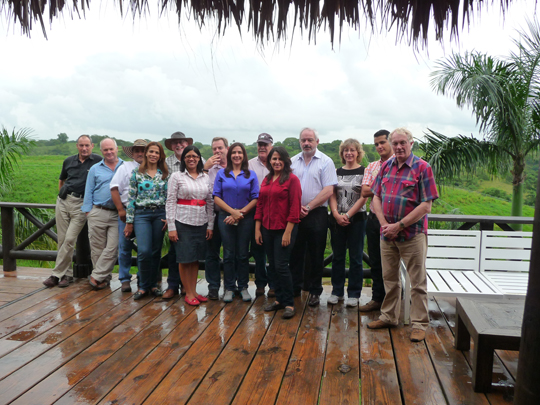 Dominican Republic’s Ministry of Agriculture officials and staff at the Los Angeles ranch.

An agri-tech conference held in the capital Santo Domingo attracted 60 representatives of the Dominican food production sector and featured a reception hosted by Minister of Agriculture Luis Rodriguez and attended by Vice-Minister Agnes Cishek, as well as the country’s Livestock Director and Chief Veterinary Officer.

Concluding with a reception given by the rector of Santiago Agricultural University, this first-ever AHDB mission to the Dominican Republic, supported by UKTI Santo Domingo and Defra, became the focus for talks on possible UK export deals for livestock genetics, potato seeds, agricultural expertise and education.

“We were given a fantastic reception and I must commend the support of both the Dominican government and the Dominican Agriculture Chamber of Commerce,” said AHDB export specialist Jean-Pierre Garnier, who led the mission.

“Although the Dominican Republic has a high level of expertise in sectors such as tropical fruits, rice, cacao, tobacco and coffee, other sectors such as meat, dairy and potato production, where the UK excels, currently lag behind and so there was a clear need for us to share our experience and expertise.

“We have already had meaningful discussions with the relevant authorities, associations and major operators and so I’m confident this encouraging showcase of UK agricultural excellence can be converted into concrete commercial exports success.”