‘Business as usual’ at Anuga despite Brexit chaos

Home » News » ‘Business as usual’ at Anuga despite Brexit chaos

‘Business as usual’ at Anuga despite Brexit chaos

According to The Livestock and Meat Commission for Northern Ireland (LMC), the main message communicated at the recent Anuga Food Fair from UK suppliers to their customers outside the UK was ‘business as usual’ despite the on-going Brexit situation. 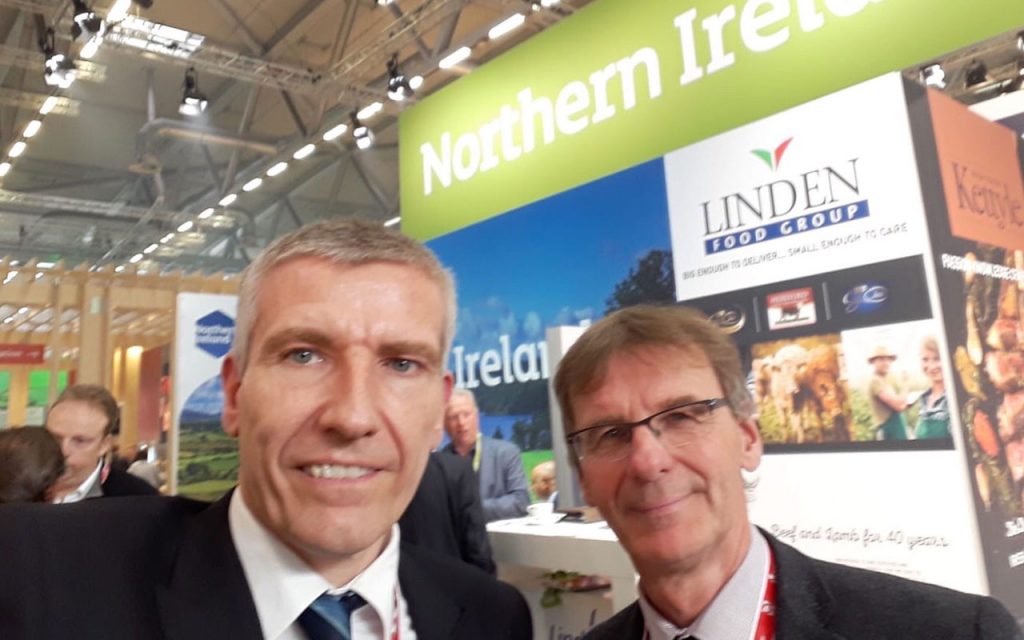 LMC Chairman, Gerard McGivern and Chief Executive, Ian Stevenson travelled to Cologne, Germany to attend the annual event which attracted over 7,500 exhibitors and over 170,000 visitors from across the world.

Commenting on his return, Ian Stevenson said: “Red meat businesses from across the UK and Ireland were very well represented in the main meat hall including five of the beef and lamb processing businesses operating in Northern Ireland.

“It was palpable from the number of visitors to their stands that the exhibitors were very busy welcoming their existing customers, exploring new opportunities and discussing the current state of play with markets and Brexit. The professionalism of the red meat industry never fails to amaze and visitors were very warmly welcomed with excellent hospitality which included sampling of high quality beef and lamb products prepared on the stands.

“LMC attended a number of receptions and events hosted by UK levy bodies including the British Meat Industry dinner at the Wolkenburg in Cologne. A consistent message from all these events was that the UK has excellent quality beef, lamb and pork products which are highly sought after in domestic and export markets and that UK businesses want to continue to supply and service these markets. Significant progress has been made in charting a path for UK beef exports to China and USA, and UK businesses are keen to hit the ground running when these markets open up.”

It was palpable from the number of visitors to their stands that the exhibitors were very busy welcoming their existing customers, exploring new opportunities and discussing the current state of play with markets and Brexit…

Attending Anuga Food Fair for the first time, the LMC Chairman Gerard McGivern said he was impressed by Northern Ireland’s ability to compete on a world stage: “Northern Ireland red meat businesses do an excellent job in marketing their business profiles and products to customers amidst an incredible range of competition from the global meat industry.

“The next few months and years are going to be challenging for our beef and lamb industry. Based on what I observed at Anuga, there is great scope for support bodies such as Invest NI and levy organisations to work closer together with each other and with industry on important pre-competitive issues.

“It’s essential that strategically important issues such as meat consumption, market access, sustainability and climate change, industry image, communication about health and nutritional benefits of red meat and ensuring that our industry gets the recognition and support tools it needs from government to enable its survival and future development, are all addressed with a collective vigour.”

With around £3 billion worth of red meat, potatoes, dairy and cereal and oilseeds products exported around the world – AHDB’s International Market Development Director Dr Phil Hadley, told more than 300 guests in Germany that work was ongoing to gain access to key export markets and build on these impressive figures.

Dr Hadley made his comments at the AHDB British Meat Dinner in Cologne during Anuga, where buyers, influencers and exporters were able to sample the very best in British meat and dairy.

He added: “Our exports are enjoying a strong period of growth, particularly red meat. In the first seven months of this year, red meat exports were worth £854 million – great news, not just for the UK economy, but for our producers and processors.

“Lately, successes have included gaining market access for our beef, lamb and pork in more new markets, most recently Japan which, after more than 20 years, has put UK beef and lamb back on the menu. We have also seen Taiwan open its doors to pork, growth for lamb in the Middle East and in just the last few months, China sign a protocol agreement for our beef.

“These are challenging times and we know that trade is volatile which is why we must work collaboratively with government and industry to make the most of any opportunities.”

At Anuga this year, AHDB was joined on its stand in the Meat Hall by 16 exporters to fly the flag for pork, lamb and beef from the UK – creating its biggest presence at the show in more than 30 years.

Dr Hadley added: “This year’s Anuga has been incredibly successful. AHDB and UK exporters have had the opportunity to engage with lots of influencers from various countries to see what prospects there are for our red meat sector. We have also had the chance to showcase our high quality beef, lamb and pork and fly the flag for UK meat.”