A sausage made by a West Lothian butcher has been selected by their peers to be this year’s ‘Sausage For Scotland.’ Butchers throughout Scotland were invited to come up with a very Scottish sausage that could be promoted during Scottish Sausage Week from 28th October to 6th November this year. 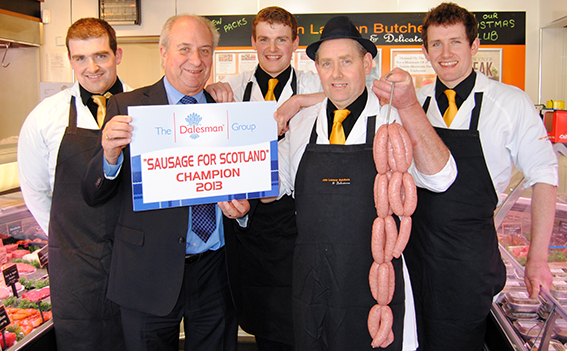 Don Wallace of the Dalesman Group with John Lawson and his three sons, Stuart, John and Graham.

The judging process that started at Perth College back in August established five finalists. These five different sausages were then served up during the first fortnight in September to butchers at six regional meetings in Glasgow, Kilmarnock, Carfraemill, Inverness, Aberdeen and Perth and at those tastings the butchers voted for their preferences.

The result when announced last week went to the Beef Sausage with Blue Cheese that was made by John Lawson in Uphall. Lawson’s receive a £500 prize from sponsors, Dalesman in exchange for the recipe which will be made available for Scottish Craft Butchers to make in Sausage Week.

A poster will be made to promote the sausage and then distributed with the winning recipe in October in plenty time for everybody to make and perfect the product.

Other finalists were:
Scottish Heather Honey & Ginger Pork Sausage made by DH Robertson in Arbroath.
Scottish Pork Sausage with Dundee Marmalade from James Pirie & Son, Newtyle.
Aberdeen Angus Beef Sausage with Oatmeal with Horseradish from Simon Howie in Perth.
The Broon-Sauce-age made by Stuarts of Buckhaven.