Membership of the Scotch Butchers Club has surged in 2013, Quality Meat Scotland (QMS) has revealed. 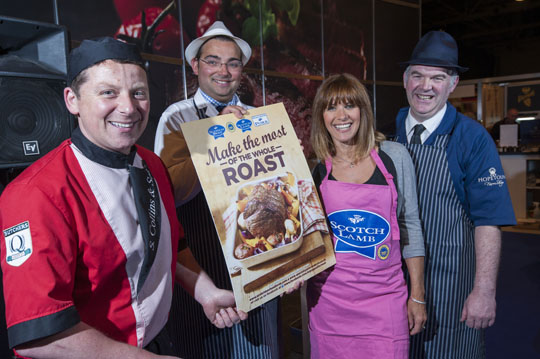 The ten per cent increase in membership of the club run by QMS takes the tally of butchers around the country who are committed to selling Scotch Beef and Scotch Lamb to over 300.

The members are all quality independent butchers – mostly from Scotland but also elsewhere in the UK – who source their Scotch Beef, Scotch Lamb and Specially Selected Pork from approved suppliers.

According to Jim McLaren, QMS Chairman, the wave of support is clear acknowledgement by butchers of the importance of the traceability and integrity underpinning the “Scotch” label.

“The horse meat scandal earlier this year prompted an increase in footfall to butchers’ shops around the country as consumers took a welcome increased interest in the provenance of the beef, lamb and pork they were buying.

“This also gave our butchers a valuable opportunity to showcase to new customers the impressive combination of traditional skills and innovation that the modern butcher’s business represents.

Mr McLaren said the strong support for the Scotch Butchers Club could also be indicative of increasing recognition by butchers of the value of impactful marketing to their businesses.

Members receive promotional material from QMS and among the recent campaigns which have been very well received by butchers were marketing materials to encourage customers to make the most of mince and to cook quick and easy Scotch Lamb recipes.

The most recent campaign – “Make the Most of Your Whole Roast” – was launched by a trio of Scotch Butcher Club members and Scottish TV personality Carol Smillie last month at the QMS stand at the BBC Good Food Show in Glasgow.

However, Mr McLaren also recognised the huge challenge the prevailing high prices of cattle is placing on others operating in the red meat chain, including butchers and processors whose margins are under huge pressure.

“The long-term viability of our world-renowned industry depends on everyone operating in our industry doing so efficiently and profitably and, accordingly, high livestock prices are proving a real double-edged sword.

“Our research shows that Scottish consumers are increasingly looking to make purchases based on local production which offers a great opportunity to butchers who support the “Scotch” brand.”

Mr McLaren said QMS would continue to work hard on behalf of the industry to drive profitability and efficiency.

“We continue to look at new ways of protecting the integrity of the ‘Scotch’ label and the fact more and more butchers are recognizing what it stands for in terms of quality assurance, animal welfare and traceability is very welcome,” added Mr McLaren.

“A key aspect of this work is ensuring we continue to take every opportunity open to us at home and overseas, to communicate the quality and integrity of our Scotch brands to ensure the “Scotch” label retains the global reputation which the industry has worked hard to build.

“The importance we place on this is underlined by the fact QMS is currently recruiting a Brands Integrity Manager whose focus will be managing our six assurance schemes and developing our recently established brands licensing scheme.”