A trio of Scotland’s top young butchers displayed their skills during butchery demonstrations which attracted record crowds at this year’s Royal Highland Show. 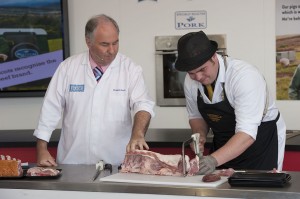 Demonstrations by the three, who are employed by butchers’ shops around the country, generated unprecedented interest among visitors to the Quality Meat Scotland stand. The displays aimed to show the public where a variety of popular cuts come from and also had a BBQ focus.

Among those who showed off their craft in the QMS demonstration theatre were Andrew Peter of Davidson’s Specialist Butchers, Inverurie. Andrew, who won the Under-22 category of the 2013 Meat Skills Competition sponsored by the Scotch Butchers Club. He displayed his talent working with Scotch Beef popeseye and a leg of Scotch Lamb.

On the Friday it was Gary Raeburn, winner of the Over-22 category of the 2013 Meat Skills Competition, who displayed his cutting prowess, this time using Scotch Beef sirloin and a side of Scotch Lamb. Gary is a member of the Forbes Raeburn and Son butchers’ team based at Huntly.

On Saturday, the demonstrator was Jamie Syme of Alex Mitchell Butchers in Glenrothes. Jamie, a finalist in the 2013 Meat Skills Competition, showed off his cutting skills to great effect as he worked on a Scotch Beef popeseye and a loin of Specially Selected Pork.

Douglas Scott, chief executive of the Scottish Federation of Meat Traders Associations, provided the commentary for the three demonstration days. He said the level of interest in the skills and passion of modern-day butchers was great news for the industry.

A recent survey of members of the Scotch Butchers Club run by QMS, revealed that the majority of butchers are very positive about the future of their businesses.

“It was fantastic to see the public taking such an interest in the skills of the three young butchers we had on the stand at the show,” said Jack Broussine, marketing executive with QMS.

“The increased interest in the provenance and traceability of meat in recent months has offered butchers a wonderful platform to showcase their businesses.

“Butchers have been attracting a new wave of customers and, from the level of interest we’ve witnessed at the show, that appears to be set to continue.

“Our butchers provide top quality meat and what is being increasingly recognized is that their traditional skills and depth of knowledge are coupled with innovation and a drive to seek out ways to improve their customer service.”