Motorway travellers up and down the country will soon be in the fast lane of a drive to get the British public to buy more British food and look for the Red Tractor logo on the food they buy, with NFU #buybritish and Red Tractor’s #TrusttheTractor banners set to spring up next to major routes in the coming weeks. 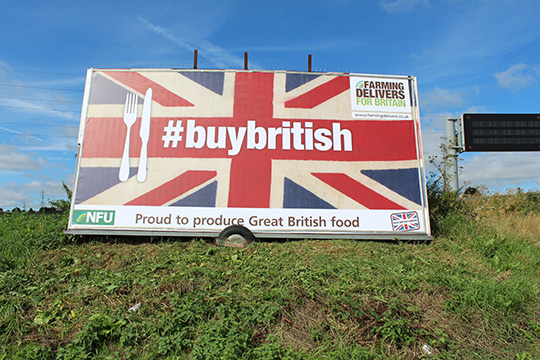 One of the new banners set to spring up on Britain’s major motorways over the coming weeks.

It follows the success of a similar scheme that saw banners appearing on farmland across the country, as part of the NFU and NPA #buybritish campaign. The aim is to erect banners near prime locations so as many people as possible can see them in the hope they will back British farming.

So far, more than 130 banners have been on display across the country.

Many of the country’s major motorways, including the M25, M6, M4 and M1 will have the banners alongside them for up to eight weeks, asking motorists to make sure they are buying British produce.

NFU president Peter Kendall said: “We have had a fabulous response to the banners that went up last month, with many members of the public reacting really positively to the message we are trying to get across, which is to back British farming wherever possible.

“Now these banners are being taken to a whole new audience, we are hoping the message continues to resonate and ensure more British food ends up on more British plates.”

The #buybritish campaign has been timed to coincide with the #TrusttheTractor initiative, backed by Red Tractor Assurance and AHDB.

Richard Cattell, head of marketing and communications for Red Tractor Assurance said: “We are delighted to be working with the NFU on the #TrustTheTractor banner campaign. As it’s the summer holidays and many people will be travelling round the UK we feel that it’s a great time to showcase our banners on various motorways and hope that the banners encourage people to trust the Red Tractor logo and what it stands for – traceability, animal welfare, food safety and environmental protection.”