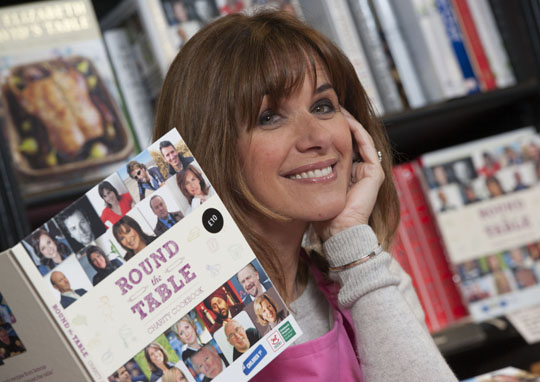 TV’s Carol Smillie will be taking part in a butchery demonstration at The BBC Good Food Show.

Ms Smillie will be wowing the crowds by participating in a butchery demonstration followed by a book signing to help promote the ‘Round the Table’ charity cookbook which celebrates the experience of eating together.

The full colour, hardback cookbook features simple, delicious, family favourite beef, lamb and pork recipes from the likes of actor Ewan McGregor, TV presenter Lorraine Kelly and football legend Sir Alex Ferguson. The inspiring collection of easy-to-cook dishes has been published by QMS and the profits from the sale of the book raise funds for children’s charities CHAS and CHILDREN 1ST.

A strong supporter of family cooking, Ms Smillie will also launch “Make the Most of Your Whole Roast”, a new QMS campaign which encourages consumers to make the most of quality meat to take the strain off their shopping budget.

The campaign includes a leaflet, available at Scotch Butcher Club member shops, packed with recipes and advice including money saving recipes, such as curries and soups and top tips on the basics of cooking a roast.

“I am a complete food enthusiast and regularly cook a roast for all the family to sit down and eat together,” said Ms Smillie.

“I always buy my roasts from my local butcher so I am really looking forward to getting on the other side of the counter and taking part in the butchery demonstrations!”

“Shoppers are always really interested to see where the meat they are eating comes from and there has been increased interest in the provenance and traceability of meat in the wake of the horsemeat issue.

“All the butchers on the stand are quality, independent butchers at the top of their trade who source their Scotch Beef and Scotch Lamb from approved suppliers.

“The butchery demonstrations give visitors an idea of what can be done with our home-grown produce and will hopefully inspire them to try a different cut of meat from the one they usually buy.”

The BBC Good Food Show Scotland runs from 18-20 October at the SECC, Glasgow.