Aubrey Allen, from Leamington Spa, has been awarded the overall supreme champion in the 2013 Smithfield Awards for its Stuffed Pork Tenderloin, which also won the title of best English pork product.

This year’s awards, also known as the Butchers’ BAFTAs, were presented by celebrity chef Jean-Christophe Novelli at an awards ceremony at Butchers Hall, London.

Over 360 products had been submitted for entry by Q Guild butchers across the country. 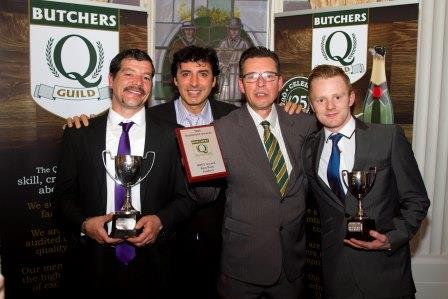 Corry’s Butchers, from Stockport, was another diamond award winner with its Carpaccio of Beef, a marinated fillet of beef, which also earned the accolade of England’s overall best beef product.

Corry’s, based in Bramall, and run by husband and wife Neil and Janice Corry, was the 2012 Smithfield Awards supreme champion with its Porchetta Pork Roast, which was served up as the main course at this year’s awards luncheon.

The third Scottish diamond award fell to Fergusons Butchers, of Airdrie, with its Beef Chipolata.

Bradwell Butchery, from Bradwell, Great Yarmouth, run by Andrew Edmonds, also won a diamond award for its Free Range Beer & Black Treacle Bacon, as did A Pearson & Son Family Butchers in Ashton-Under-Lyne with its Pork and Honey Glazed Parsnip Sausage.

South Staffordshire butcher Allan Bennett, from Codsall, near Wolverhampton, was also celebrating after winning a diamond award for its Huntsman Pie.

In addition, a gold award winner, Lamb with Mint & Redcurrant Sausage, from George Payne Butchers in Brunton Park, Gosforth, went on to be chosen as the best English lamb product.

Another butcher, Dennis of Bexley from Dartford in Kent, had the best Scottish Lamb product with its gold award-winning Easy Kleftico.

Q Guild national chairman Brindon Addy said: “Products were evaluated by an independent panel of expert judges and the fact that 170 of them, or 45% of the total entry, received either diamond or gold awards speaks wonders for the quality of submissions and the emphasis our members continue to place on product innovation. Smithfield Awards remain among the meat industry’s most prized accolades.”