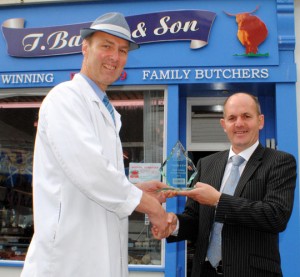 James Baillie was delighted: “I was chuffed to bits to win the regional title but to come out as overall winner is just fantastic.”

Not surprisingly James would not divulge what made his product stand out from all the rest merely stating: “Our recipe has been perfected over the years to meet our customers’ tastes. We try and spice it up but don’t overdo it. We hope that more will savour what is now officially the best.”

This competition organised by the Scottish Federation of Meat Traders attracted almost 100 entries. It was judged regionally with the Regional winner from each of the five heats both going through to the Scottish Final.
In the final the North of Scotland was represented by Forbes Raeburn & Sons from Huntly, the East by Stuarts of Buckhaven, West by Mearns T McCaskie in Wemyss Bay, South East by Shaws Fine Meats, Lauder and the South West by T Baiilie & Son.
The five finalists were then visited when their products were purchased by mystery shoppers and taken away for final judging.