The huge potential for exporting lamb to the Middle East was highlighted by EBLEX in a meeting with Food and Farming Minister David Heath MP at a major international trade event. 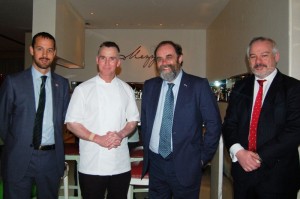 Jean-Pierre Garnier, EBLEX export manager, outlined the future possibilities for exports to the region during the annual Gulfood food and hospitality show at the Dubai World Trade Centre, in the United Arab Emirates.

EBLEX representatives were joined at the show by businesses already exporting lamb to markets in the Middle East, looking to build on existing links and generate new potential leads in the region where food imports will double over the next 10 years. They later joined Mr Heath, Mr Garnier and Her Majesty’s Consul General Edward Hobart for a lamb dinner, organised by EBLEX and UK Trade & Investment (UKTI) and cooked by celebrity chef Gary Rhodes.

Mr Garnier said: “With more than 4,000 exhibitors, Gulfood is the biggest event of its kind in the region and provided the perfect platform to showcase what we can offer. We are currently allowed to export lamb and mutton to Bahrain, Qatar and the UAE, and hope to do so in Oman, the Kingdom of Saudi Arabia and Kuwait later this year.

“It’s been a fantastic show and we were delighted the Minister visited our stand, enabling us to highlight the export work currently underway and what we could potentially achieve in the future. For example, we fly in 1.5 tonnes of lamb a week to UAE supermarkets but there is potential for us to do much, much more. Gulfood is the perfect opportunity for our exporters to lay the foundations and drive this forward.”

Mr Heath said: “Food and drink exports can be an engine for growth to help our economic recovery and generate jobs as we compete in the global race. We need to encourage more food and drink companies to venture into new markets such as the Middle East. That is why I attended Gulfood – to help British businesses make the most of this exciting opportunity, unlock doors and break down any barriers.”

EBLEX’s presence at Gulfood came a week after a delegation of nine veterinarians from the Gulf Cooperation Council (GCC) were given an insight into UK controls for the production of lamb and mutton as work continues to open more markets in the region.

Developing exports has been a key part of EBLEX’s strategy for the last two years and has led to the opening of market access to more than 60 countries for sheep meat.