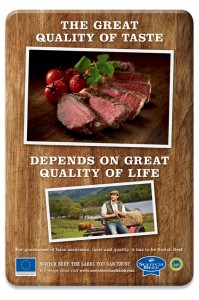 The £650,000 campaign in Scotland and England – where the focus will be on South East England and Greater London – is set highlight the provenance, traceability and integrity which underpin the Scotch Beef brand. The aim is to inform and educate consumers and inspire them to choose Scotch Beef, with its much-coveted PGI status.

Part-financed by the European Union, the eight week campaign covers 955 poster sites across Scotland, Central London and the South East as well as magazine adverts in national and Scottish press. Two creative executions are being used – “Great Quality of Taste” and “Get Behind the Label” which features some of the hundreds of farming families throughout Scotland who work hard to produce top quality beef.

Three hundred independent butchers, who are members of the Scotch Butchers Club, will also receive promotional packs with steak sauce recipe cards and resources to help them boost their sales of Scotch Beef steaks.

Laurent Vernet, QMS Head of Marketing, said: “We’re experiencing record consumer awareness of Scotch Beef PGI in London and the Home Counties and the campaign offers the perfect platform to capitalise on this.

“Targeting professionals, food enthusiasts and families, we hope to showcase not only the quality of Scotch Beef but also its versatility and accessibility. Whether it’s a special treat, dinner out or a simple family meal, we want consumers to choose Scotch Beef as a brand they can trust and have confidence in to be the best.”