The hotly contested title of Game to Eat Student Chef of the Year 2015 has been won by Jack Gates, from North Hertfordshire College. 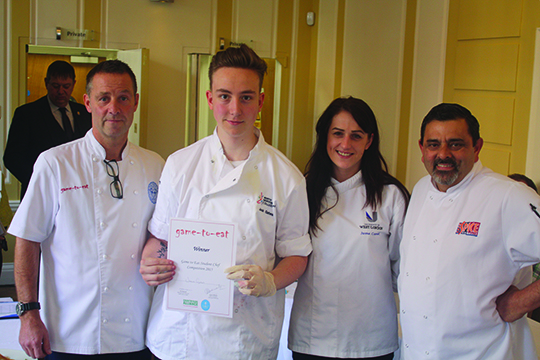 Chairman of the judging panel and Game to Eat consultant chef Lee Maycock said: “Jack’s dish was perfectly executed and the seasoning was faultless. The partridge was cooked to perfection and under the time restrictions he truly excelled.”

12 young chefs took part in this, the fourth annual Game to Eat Student Chef of the Year Competition at Westminster Kingsway College, London.

Jack Knott, of the Game to Eat campaign, said: “This year’s competition was fierce, we had more nominations than ever before and the standard of the 12 finalists was phenomenal. It really was anyone’s competition. It is very good news for the future that these young chefs have such mastery of game cookery.”

Jack Gates wins £250 of vouchers for cookery equipment, a week’s work placement at The Ledbury and an engraved Flint and Flame knife. He said: “Although I am relatively new with game I spent last week perfecting the timings of the partridge and I do not think the dish could have gone better today. I am very excited to get the chance to work at The Ledbury.”

An encounter of the Royal kind for AHDB Pork