A meat vending machine has been installed outside butcher’s shop L’Ami Txulette in the French capital, causing mixed reactions over social media platforms. 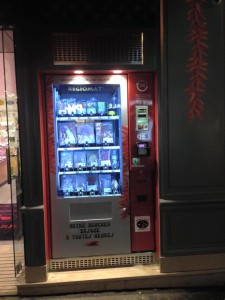 The machine will dispense steak, sausages and ham at all hours of the day, vacuum-packed by the owners of the butcher’s shop. Beef carpaccio, Bayonne ham from the Basque country, chicken and eggs are also available to buy from the machine – which accepts both cash and credit cards.

The meat dispenser was made in line with the idea of making fresh produce available 24 hours a day, despite the country’s reluctance to open stores seven days a week.

L’Ami Txulette butchery told The Telegraph: “The vending machine offers a selection of our products which we prepare and vacuum-pack ourselves. We wanted to give our customers an additional service when the shop is closed.”

It cost nearly €10,000 (£7,694). The first meat dispenser in the country was installed by a French butcher in Sainte-Catherine two years ago, with the inspiration having come from Germany, which has around 500 meat vending machines.

Freshly made hot and cold food from vending machines is already a part of everyday life in countries such as the Japan and the US, and it’s thought that the UK could soon follow.

The demand of such vending machines is said to have increased due to consumers snacking more and eating on the go, as opposed to sitting down to a traditional three meals a day.

Looking at social media, some commenters have expressed their thoughts about the machine being a good idea and a convenient source of fresh produce, whereas others feel the idea is ‘odd’.

Some shop owners have also suggested that the machines could stop customers from coming into their shops.

Meat Management is keen to hear what our readers think of the concept. Do you believe meat vending machines would be a welcome idea in UK? Or is the idea more suited to other European countries and consumers further afield? Let us know by emailing editorial@meatmanagement.com.