Footballing hero Sir Geoff Hurst MBE is to be the guest of honour at the 2014 Meat Management Industry Awards dinner in 2014.

Now one of the most prestigious events in the meat industry calendar the Awards Dinner will take place on 4th June next year at the Grand Connaught Rooms in London. Details of the 2014 awards and how you can take part will appear in the November issue of Meat Management magazine. 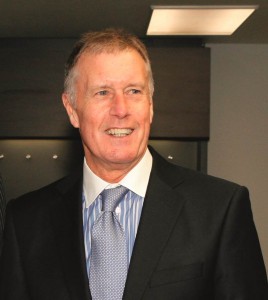 Sir Geoff Hurst MBE will be the guest of honour at the 2014 Meat Management Industry Awards.

Sir Geoff secured a unique place in the history of football when he became the first and, over 45 years later, still the only player to score a hat-trick in a World Cup Final.

Knighted in 1998 and inducted into the English Football Hall of Fame in 2004, Sir Geoff holds a special place in the hearts of football fans and has become an iconic sporting figure across the world.

Initially a strong-running midfielder,  the late West Ham and England manager, Ron Greenwood, spotted Geoff’s talent as a striker and moved him to centre forward, the position he was to play for his entire football career.

Early in 1966, Alf Ramsey, the England manager, named Geoff in the England line-up and  included him in the squad that was to compete for the World Cup at Wembley in July of that year. The 30th July was to be a pivotal moment in Geoff’s career, and his life, when he famously became the only man to score a hat trick in a World Cup Final. His place in the history of football was assured.

Continuing his club career with West Ham until 1972, Alf Ramsey selected Hurst as his first-choice in the attack for six years between 1966 and 1972, the longest run of any forward during his time as manager. During this time, Geoff became one of the highest paid footballers in the UK.

Today, Sir Geoff is asked about the World Cup on a daily basis but there was a gap of 15-20 years between his football career and the reverence for the achievements of the England team that has grown in more recent years. Would Sir Geoff have chosen to stay in football if he had the chance? “It wasn’t an option at the time. I had bills to pay and a family to look after. In the long term, it proved to be a good decision. I enjoyed my second career and having to go from the top, to the bottom and work my way back up again taught me something about humility – not a bad lesson for some of the egotistical young players in the modern game.”

Who would disagree with that?