When the category was added to the 2014 awards Paul was keen to avoid being pipped at the post as had happened to him in 2011 in the SFMTA Sweet Products evaluation held at Strichen Community Park. 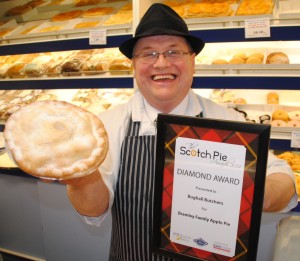 That involved a 335 mile round trip as Paul insisted on delivering his product in as perfect a condition as possible: “We went up there and got 99% for our apple pie but were beaten by Alan Stuart (Stuarts of Buckhaven) who got 100%. We said ‘how can we do that?’

“We have worked on introducing butter into the pastry and looked at different varieties of apples. Now we are fixed on a Bramley apple done in brown sugar instead of caster sugar. We have introduced some soft brown sugar into our pastry and that makes a nice crisp pastry. The filling has been good and I attended one of Robert Ross’ pastry courses where he made an apple pie from scratch. I paid particular attention to the filling to what he did with the filling – half sliced and half apple puree. That is what we do and it has paid dividends with this win.

“Being a new category, I was absolutely delighted that butchers won it because apple pies are a massive thing in the bakery industry, it is the next thing to a scotch pie in significance so to win that I was delighted.”

Boghall Butchers recently opened a second shop seven miles away in Broxburn but Paul claimed that the whole community in Boghall had taken an interest in how the apple pie would do when the results were revealed:”The customers have been asking over the last few days when the results were coming out. The type of community that it is will mean they will share our delight.

“I don’t know how we will keep up with the supply but we said that about the scotch pie many years ago and we managed then so we will do the same with the apple pie.” 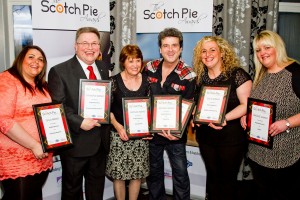 The twice World Scotch Pie Champion (2005 & 2009) served warning that his focus next time would be back on the Scotch Pie. The diamond for apple pie was just one of seven awards for Boghall Butchers who also won prizes for sausage rolls, bridies, steak pies, fish and cold savouries. Their Scotch Pie won bronze and for anyone else that might have been a great result but standards and pride are high in Boghall and Paul said that is where the emphasis would be for next year.