A free range pork sausage has picked up the top award and been named the very best in the grand final of the BPEX Foodservice Sausage of the Year competition 2014, which took place at Butchers’ Hall, London recently. 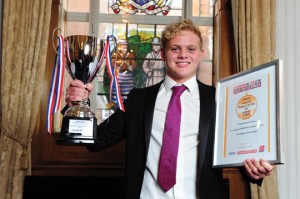 George Parker with his winners cup.

The winning sausage, which was entered into the ‘Traditional Pork Sausage’ category by Nuneaton-based Frank Parker Butchers, scored highly on taste, texture and appearance.

“We have been making our free range sausage for around three and a half years and have worked hard to perfect the recipe. Available in restaurants and also sold in our butcher’s shop, it regularly receives great feedback on its flavour and texture so we hoped it would do well in the competition. To win the hotly contested Overall Champion title confirms that we are doing things right and that’s very reassuring.”

BPEX foodservice trade manager, Tony Goodger, said: “We were very impressed by the fantastic selection of quality assured sausages entered into this year’s final; with such a diverse range of flavours and varieties, it was an extremely close competition. Frank Parker Butchers has done incredibly well to scoop the ‘Overall Champion’ title – it was by no means an easy feat and everyone involved should be proud of their achievement.

“The competition marks the start of this year’s British Sausage Week (3rd-9th November), which celebrates the nation’s love of the great British banger. The week acts as a fantastic platform for butchers, farm shops, retailers and sausage-makers to promote quality pork sausages and highlight their quality assurance credentials to customers by using the Red Tractor logo (or an equivalent quality mark) where appropriate.”