Ogre’s Eyes in Swamp sauce from Kirkintilloch’s Pauls Quality Butchers in Scotland were the winners of the Halloween awards. 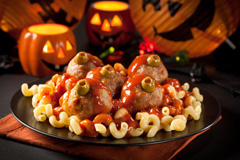 The awards were set up to stimulate butchers into making products with a Halloween and Bonfire Night theme. Craft butchers were challenged to get their thinking caps on and create something that would capture their customers’ imagination.

Scott Brothers in Dundee made the Catherine Wheels – sausages on sticks – that were the best Bonfire Night product and Ogre’s Eyes in Swamp Sauce by Pauls Quality Butchers, Kirkintilloch were the best product in the Halloween category.

For these award winners their tricks proved to be a real treat when it came before the judges at the product evaluation event at Dunfermline Athletic Football Club. Their products were chosen from over 80 entries in each of their categories as the most tasty and promotable. 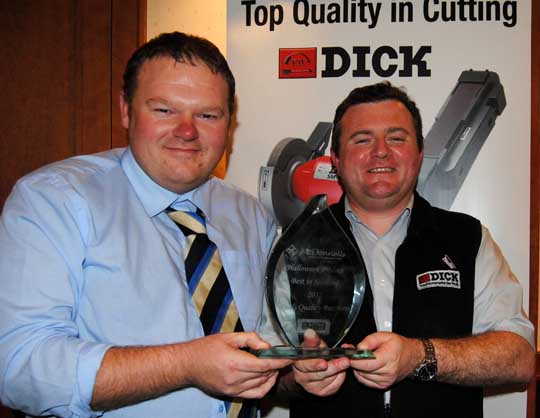 They received their awards from John Gallagher of the event sponsors McDonnells (Queen Street) Ltd. John said: “It was really good to see all the scary products and lots of great product ideas come forward. I think we can look forward to seeing some real innovation in butchers shops this Halloween and Bonfire Night.”

The products were photographed by Eddie Phillips at Abertay University with the valuable help of local food stylist Maxine Clark. Promotional posters were then made using these images and the posters and the recipe for these products has been circulated to all Scottish Craft butchers so that they can be promoted by butchers throughout the country.

Note: For those who might be concerned – Ogre’s Eyes are made from pork and has cheese worked into the product, finished with a stuffed olive.