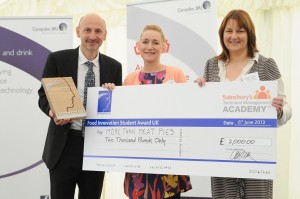 The More than Meat Pies team from Harper Adams University has been awarded gold prize at the Ecotrophelia UK 2013 for their product, Hearty Meal, a ready meal offal pie. Along with a £2,000 cash prize, the team will receive a one-year IFST membership and a number of Elsevier food science publications.

The UK heat of this Europe-wide competition was organised by UK food and drink research organisation, Campden BRI, in conjunction with the Institute of Food Science & Technology (IFST), the independent qualifying body for food professionals in Europe. The competition challenges young people pursing a career in the food industry to design an eco-friendly, innovative food or beverage product with commercial potential.

The Kombu Nations team from Nottingham University team was awarded silver prize and £1,000 for their Chinese-style sausages made with toasted sesame and shiitake mushrooms. The bronze prize and £500 was awarded to a cross-student team representing King’s College London, Sheffield Hallam University and the University of Leeds for Vejects, a snack made from sub-standard vegetables.

Natalie Saxton, who is studying Food, Nutrition and Wellbeing at Harper Adams University, accepted the gold prize on behalf of the More Than Meat Pies team. She said “We are delighted to win gold prize. It’s been an amazing experience. One of the best things has been working as a team to bring everyone’s creative ideas together in one product. The judges have been really supportive and we are now looking forward to the European finals.”

The awards were introduced by the competition’s Chief Judge and Executive Director of Warburtons, Brett Warburton and presented by Alec Kyriakides, Head of Product Quality, Safety and Supplier Performance at Sainsbury’s at Campden BRI’s annual open day for the food and drink industry at their headquarters in Chipping Campden, Gloucestershire. After listening to the team pitches and tasting the products, “the dragons” – a panel of top food industry experts – carefully considered each entry for its industrial feasibility, taste, eco-innovation, originality, creativity and innovation and market credibility.

Prof Margaret Patterson, IFST President and Ecotrophelia judge said: “The judges were all impressed by the excellent standard of the entries. The hard work and creativity of the students was evident. These young food scientists and technologists should be a real asset to the future of our profession.”

The competition has attracted sponsorship from big industry names including Sainsbury’s, defra, Coca-Cola, Elsevier, PepsiCo, Warburtons and Genius Gluten Free, as well as the Farncombe Cotswold Conference Centre. The Harper Adams team will go on to compete against the other 15 gold-winning national teams from across the whole of Europe for the chance to win up to €8,000 in the Ecotrophelia Europe competition, which will be held in October. Teams of students who are interested in entering a team for Ecotrophelia UK 2014 can register their interest with Jane Emery at J.Emery@ifst.org.