Home » News » Have your sausages been ‘discovered?’

Have your sausages been ‘discovered?’

Have your sausages been ‘discovered?’

In the run up to British Sausage Week 2013 (4th-10th November), the competition to discover Britain’s Greatest Bangers is now on! 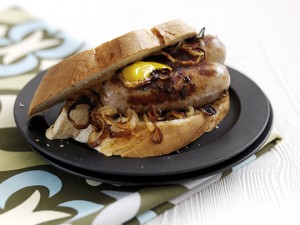 The challenge is open to all butchers, retailers and branded manufacturers that believe they have the best pork sausages in the business. From traditional classics to new creations, this is a chance to showcase premium varieties and get involved in one of the biggest annual food promotions.

A team of leading industry experts will be judging two categories in a bid to find the country’s greatest sausages. The panel will be on the hunt for the ‘Best Traditional Pork Sausage’ and will be scoring entries based on appearance, taste and seasoning.

The second category, designed to reward innovation, has been introduced in recognition of this year’s British Sausage Week ‘discovery’ theme. The ‘New Pork Sausage Discovery’ category is for sausages that bring exciting tastes, flavours and uniqueness to the market.

BPEX butchery and product development manager, and lead judge, Keith Fisher, said: “With over 500 sausage varieties available in Britain, it has never been more important for quality sausages to stand out from the crowd. The competition – along with the week as a whole – is a fantastic platform for the industry to boost awareness and sales of Red Tractor and other assured sausages.”

Taking part this year couldn’t be easier with a dedicated online entry portal at www.bpexentries.co.uk/sausages. Alternatively, entry forms and terms and conditions can be downloaded from http://porkforbutchers.bpex.org.uk or requested from sausageenquiries@bpex.ahdb.org.uk

Entrants must submit details of their nominated sausages by Friday 30th August 2013, while judging will take place mid-September. Finalists will be invited to a prestigious presentation event in London just before the start of British Sausage Week, hosted by the celebrity British Sausage Week Ambassador.