Macmillan Cancer Support has come in for fierce criticism from the meat industry after launching a campaign encouraging people to give up meat during March.

AIMS pointed out: “The farming community is a big supporter of cancer charities but maybe they’ll now think twice and perhaps just support a local hospice or more worthy charities.” 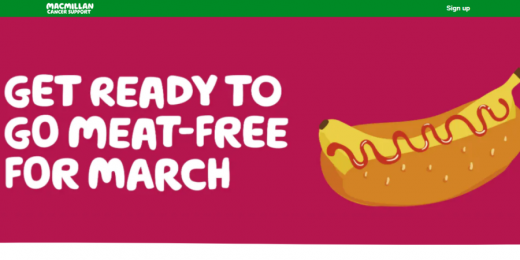 “…it is very disappointing to see a public body such as Macmillan dictating what we should and shouldn’t be eating.”

Meat Management editor, Pam Brook, said: “It is hugely disappointing to see this from Macmillan. Farmers, butchers and meat-eaters all over the country have been avid supporters of this charity, but this is just not right. Meat eating is not wrong or dangerous, so it is very disappointing to see a public funded body such as Macmillan dictating what we should and shouldn’t be eating.”

Macmillan said its latest sponsorship drive is a ‘great way for people to challenge themselves’ and that ‘every meat-free moment matters.’

However, the organisation was quick to see and respond to the backlash, and in a tweet said: “We don’t want to disrupt anyone’s livelihood or alienate the farming community. This event isn’t intended to change eating habits permanently and is limited to one month.

“We have to cater for the diverse supporters we have which is why we have a range of fundraising campaigns. The funds raised by the event will help us continue to offer physical, emotional and financial support to people living with cancer.”