In an innovative move Aberdeen butcher, John Davidson, has developed the “Jurassic” Scotch Beef steak and during the past three weeks he has sold 2.5 tonnes to customers intrigued by the concept.

The idea behind the development of the huge steak was, said Davidson, to offer customers a lower cost but highly flavoursome steak.

“We wanted to develop a more affordable steak which still had fantastic eating quality. The results have been outstanding and surprised us all!”

While unwilling to give too much away, Davidson revealed the steak was from a seamed out hindquarter muscle. He has been serving customers with steaks tipping the scales at up to 7.5lbs in weight and has plans to create an even bigger steak. “We’re selling the Jurassic for £20/kg compared with £30/kg for sirloin or £40/kg for fillet which means its more affordable to consumers and results in a better margin for our business – a win-win all round.”

The huge steaks have been creating quite a buzz in the shop and, as of last weekend, are also available via mail order throughout the UK at www.johndavidsons.com. The Davidsons’ staff have, however, had to correct a couple of their younger customers who mistakenly thought the steaks were from dinosaurs!

“The steaks, designed to be shared by 15-20 people, create quite a talking point round the table or, weather providing, the BBQ,” Mr Davidson added.

Among those to feast their eyes on the immense steaks at the Highland show was TV personality Aggie MacKenzie, a celebrity chef at the Quality Meat Scotland cooking demonstrations. A 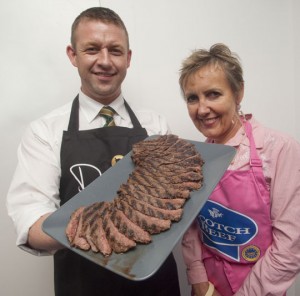 TV celebrity Aggie MacKenzie pictured with butcher John Davidson and one of his Jurassic Scotch Beef steaks sliced and ready to share.

Undaunted by the wet weather Aggie performed all her demonstrations of dishes using Scotch Beef, Scotch Lamb and Specially Selected Pork in a stylish pair of pink wellies!