The Butchers’ Hall in London provided the prestigious backdrop for this year’s Institute of Meat / Meat Training Council Awards and were presented by Keith Fisher the Chief Executive of the IOM to an expectant gathering of around 80 guests.

The Master of the Worshipful Company of Butchers Ian Kelly handed out the Awards and the presentations were followed by an excellent lunch in the great hall.

Meat Management magazine sponsored the ‘Best Learner in the Meat Industry’ Award and was one of 8 sponsors supporting the event. Christopher Broadhead who was nominated by Leeds City 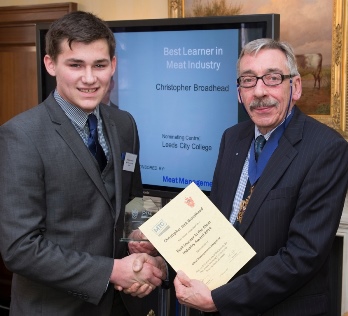 Meat Management magazine sponsored the ‘Best Learner in the Meat Industry’ Award which was presented to Christopher Broadhead (left) by Ian Kelly, master of The Worshipful Company of Butchers.

College won the category and other winners were as follows:

In addition, the Meat Training Council awarded three Accredited Master Butcher Awards when Bill Jermey of the MTC joined the Mater to hand out the certificates. The MTC Master Butcher Award was created for the many people in the industry that have a thorough knowledge of every sector and are truly worthy of an official accolade.

This year the Awards went to Marco Peerdeman who is manager of Jamie Oliver’s Barbecoa Butchers shop at St Pauls, London, David Smith of the ABP Group and Adrian Walker of Golden Valley Meat and Game Ltd. 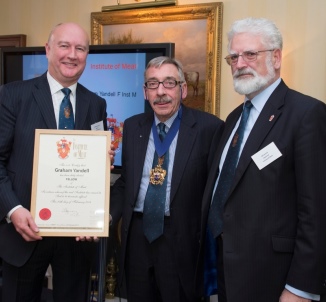 In concluding this year’s Awards there was a Fellowship of the IOM awarded to publisher of Meat Management Graham Yandell. Fellows of the Institute of Meat are nominated and selected at the discretion of the IOM committee and made in recognition of a significant contribution to the UK meat industry. Graham has been involved in the UK meat industry since 1982 and is a Liveryman of the Worshipful Company of Butchers. He is also a past Festival Chairman of the industry’s charity the BDCI. Graham commented: “I was surprised and flattered to be awarded a Fellowship, particularly as I know I join a select group of industry stalwarts who have been honoured over past years for their services. The Awards event was a splendid occasion and I am a great admirer of the work done by IOM and MTC. The day was made extra special by receiving this special tribute and I am most grateful.”