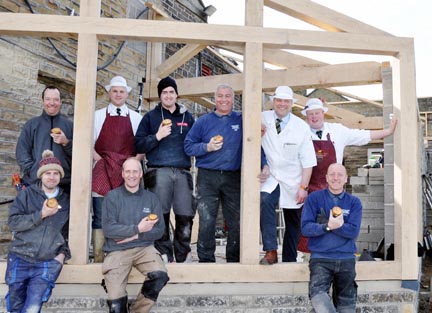 Builders and other local contractors grab a pie break, as the new extension at J Brindon Addy Butchers take shape. Brindon Addy is pictured third from left, with main contractor Iain Slater to Brindon’s right. The two other butchers are Adam Shaw, left, and Joe Brereton.

Although based on the edge of the Pennines 1,000ft above sea level in the remote village of Hade Edge, with a total population of less than 1,000, the business – thought to be one of the highest located butcher’s shops in England – continues to attract growing customer numbers from across the region and beyond.

The new-build project will add a 48sq metre extension to the existing retail area. Building work is due for completion by the end of March, with shop fitting taking place during April, ahead of the planned relaunch at the beginning of May.

The shop is continuing to trade throughout the improvements and, once complete, the scheme will not only allow Addy’s to extend and better display its current core meat-related product ranges, but also introduce new fresh and frozen food lines such as fish, vegetables and ice creams. Home-made ready meals ranges will also be increased.

Brindon Addy said: “While we will always remain a traditional independent family-run butcher, we also need to move with the times and cater for ever-changing tastes and pockets.

“Adding to existing product ranges and diversifying into new lines will allow us to do just that, at the same time increasingly supporting local producers and, in turn, further boosting the local economy.”

When the business was first launched in a single 255sq ft cutting-up room in 1986, its primary role was to service the needs of local farmers with demand for beef, lamb and pork. Today, many of those self same farmers continue to supply the shop with top-notch locally reared prime beef, lamb and pork.

Addy’s Butchers first opened the shop to the general public in 1993 and further expansion over the years has seen the addition of an in-house bakery, standalone beef maturation unit, delicatessen and new back shop. The main shop area alone has more than doubled to 540sq ft and is set to do so again with the latest extension.

The shop now trades seven days a week and serves almost 1,000 customers on a weekly basis, producing an average customer spend of £12.50 per head. It also has a thriving online ordering business, with annual turnover currently running at £650, 000.

Addy’s now employs an eight-strong team, described by Brindon as being “integral to our continuing progress and development.”

Over many years, the business has picked up numerous awards for its products in local, regional, national and international meat trades competitions and evaluation events. Its support of local farmers saw Addy’s chosen as national Meat Buyer of the Year in the Pig & Poultry Marketing Awards.

The business was also voted best shop in the North of England in the 2011/12 Meat Trades Journal Butcher’s Shop of the Year Awards and last year won through to national final of the Meat Industry Awards, another annual competition to find Britain’s best butchers shop.

Brindon Addy is himself one of the best-known and most respected figures in UK butchery through his chairmanship of the Butchers Q Guild, made up of some 120 elite butchers from Inverness to Cornwall. He is also a former north-east regional chairman.

His three-year tenure at the national helm, in which he has effectively acted as both the face and voice of the Q Guild, will end in January next year. “Sharing the expertise, knowledge and inspiration of some of Britain’s best butchers has also been key to the success and evolution of the business,” said Brindon.

Local contractors are undertaking much of the work, with Iain Slater Builders in Honley constructing the new extension. Q Guild corporate member Watco Systems, of Dalkeith in Scotland, will refit the shop when building work is complete.