JSR Genetics’ first ever placement student, Hannah Sewell, has established an important research project that will continue to be funded by Sainsbury’s and will see involvement from the Scottish Agricultural College once she returns to University in September. 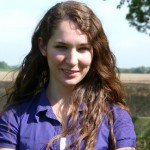 Hannah (20) is midway through a degree in Biology at the University of York and took the placement after looking for an opportunity to spend a year in industry during her degree course.

The University of York was founded by Arthur Sykes Rymer, the grandfather of current JSR chairman Tim Rymer. Arthur Sykes Rymer was also instrumental in the campaign to restore York Minster following the 1984 fire, and was sheriff of the City from 1949-50.

Hannah, who hails from Kent, doesn’t have an agricultural background, but was attracted to JSR because of its genetics work.

“I applied for the position as it was with a genetics company,” said Hannah. “I knew very little about pigs, but I like working with animals and as I suspected, I do absolutely love it.

“The placement has been very wide-ranging – for example one day I might be collecting samples from the abattoir, the next I could be testing the tenderness of meat in our Food Quality Centre using our Tenderscot machine.”

Hannah quotes the project work she was charged with as her favourite part of the job and particularly enjoyed working on her own initiative, collecting data and analyzing results.

Perhaps the most significant initiative she has been involved with is a research project looking into the possible causes of piglet mortality in freedom farrowing systems. Hannah used a farm local to JSR as the subject of her research.

She said: “Just before Christmas I spent about two weeks at the Morgan’s farm at Pockthorpe near Driffield in East Yorkshire. I was recording temperature, humidity, sow and piglet position among other things, to try and determine whether there was anything statistically, that might contribute to piglet mortality in these systems.

“We know that there are high numbers of laid-ons for example, but we wanted to establish if something environmental could exacerbate the problem.

“The work was initiated by by Cranswick Country Foods, Sainsbury’s and the Scottish Agricultural College and will continue once I’ve returned to University. The College will take my data and continue the work going forward. It’s potentially a very exciting development.”

JSR’s head of science, Stephen Waite feels the project could have far-reaching implications for the UK industry.

He said: “This research could be vital. Indeed, it’s already led to a larger £200k spin-off project, with the potential of another €1million scheme being built on that.

“If the UK or the EU were to ban farrowing crates, as they already have in Sweden, more research would be needed on how to make freedom farrowing a profitable solution. JSR want to be at the forefront of that research and this work can help put us there.”

Hannah’s placement will come to an end in July and she will return to University in September. Once she’s completed her undergraduate course Hannah would like to continue with her studies and is now looking at a career in genetics.
www.jsrgenetics.com