Lishman’s Butchers in Ilkley, West Yorkshire, has been crowned the overall supreme champion in the Q Guild of Butchers 2020 Smithfield ‘Star’ Awards. 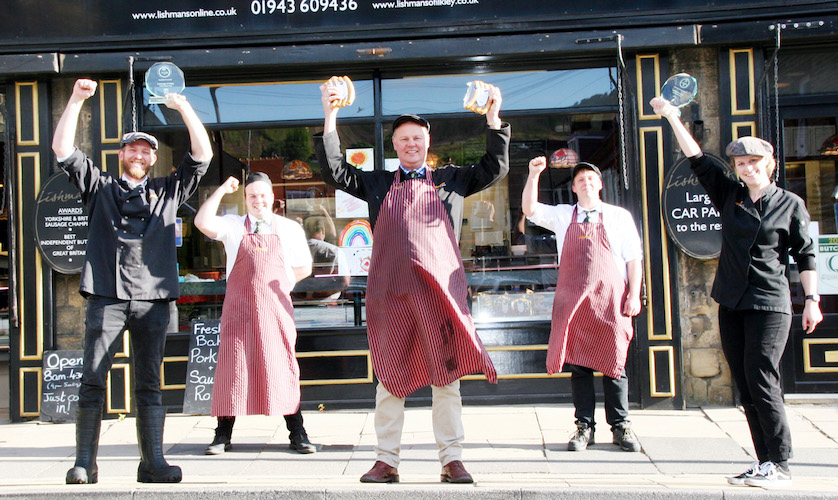 The Leeds Road shop struck diamond by presenting the best product in the Innovative Sausage category with its Chilli Cheese Dogs, which had first picked up a top-ranked 3-star rating.

Judges then pitched the Hotdog against 12 other diamond award winners, before nominating it as the finest in the entire competition. They deemed it: “A fantastic looking and tasting product, with a great distribution of ingredients, a lovely taste and the chilli did not overpower the lovely pork flavour.”

Lishman’s describes its Chilli Cheese Dogs as a true Yorkshire Frankfurter made with shoulder pork from RSPCA Freedom Food-accredited pigs, naturally beech smoked, then flavoured with cheddar and jalapenos. Unlike some popular brands of hotdogs, Lishman’s Hotdogs contain no mechanically recovered meat.

“These awards are a great way of showcasing our members and their achievements. They work really hard to develop outstanding products and to keep up with consumer trends, therefore, to have it topped off with an industry judged accolade is the icing on the cake, for which they should be very proud.”

David Lishman, who is the current Q Guild of Butchers national chairman and runs the multi-award-winning shop with his daughter Emma and a 16-strong team, said: “Naturally, we’re over the moon to be chosen as Smithfield ‘Star’ Awards Champion of Champions in the face of such strong competition from other leading fellow butchers nationwide. It is one of the highest accolades an independent Q Guild butcher can ever hope to attain. I dedicate it to our entire team.”

For the first time this year, the revamped Smithfield ‘Star’ Awards had a brand-new star rating system through which 3-star, 2-star or 1-star certificates were awarded to products achieving a set standard. Diamond awards are then achieved by pitching all the 3-star products against each other to find the ‘Category Champion.’

A brace of Diamond Awards was picked up by two entrants:

Among several new awards categories this year was the Young Butcher of the Year, open to all aged under 24 and introduced to both recognise and reward the industry’s rising stars. The honour of becoming the first-ever recipient fell to Northumberland and 18-year-old Robert Darling, of Turnbull’s Butchers in Alnwick.

Part of the brief was that nominees must have developed a product sold in the shop and Robert’s was Pork Wellington, awarded 3-star and universally praised by the judges as being technically excellent and performed well when cooked.

Butchers Q Guild general manager, Claire Holland, said: “These awards are a great way of showcasing our members and their achievements. They work really hard to develop outstanding products and to keep up with consumer trends, therefore, to have it topped off with an industry judged accolade is the icing on the cake, for which they should be very proud.

“As supreme champions, Lishman’s have proved that the hard work in developing these pays off. An outstanding product, their Chilli Cheese Dogs offer stiff competition to many other hot dogs on the market. By using local pork as well, they truly are a regional product to be proud of.”