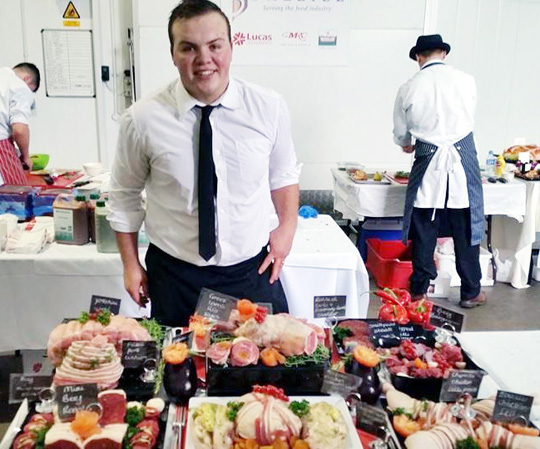 Lishman’s Joe Smith is pictured with the creations that won him the young butcher’s title.

Joe, 21, of Oakworth, proved himself a cut above the rest when taking part in the contest at Dalziel’s Yorkshire headquarters in Glasshoughton, near Wakefield.

He explained: “We were given two hours to work our magic on shoulders of lamb and pork, a knuckle of beef and a brace of chickens. We had to cut them up and make as many dishes as possible out of these products without having any waste.

“The judges were looking at our butchery and presentation skills and the imagination used to create the products. I produced 15 different dishes in total and was over the moon to be chosen as Yorkshire champion. Events like these are a great learning curve.”

Educated at Salts Grammar School, Joe, who holds a NVQ Level 2 Meat & Poultry qualification and has completed his apprenticeship, has worked at Lishman’s for the past four years. He has progressed quickly and his efforts have seen him recently promoted to assistant shop manager.

Joe received a trophy, certificate, £100 worth of vouchers and butchery knives to the value of £200, presented by the British and Commonwealth featherweight boxing champion Josh Warrington, of Leeds.

David Lishman said: “We remain fully committed to nurturing the skills of gifted young butchers like Joe and Conor, who represent the very future of our industry sector.”