Clarissa Dickson Wright, red meat champion and one half of the Two Fat Ladies cooking duo has passed away, aged 66. 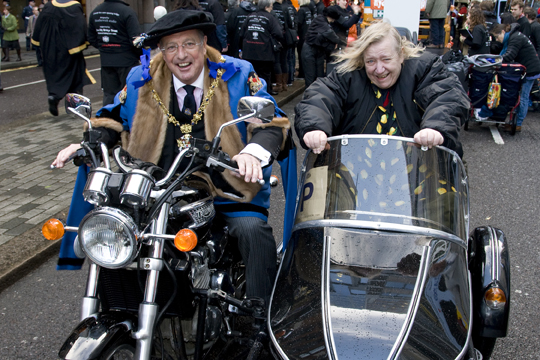 The remarkable Clarissa Dickson Wright with past Master of the Worshipful Company of Butchers, Jeffrey Davies.

A great champion of the red meat industry Clarissa was a Liveryman of the Worshipful Company of Butchers and one of the few people to drove sheep across London Bridge in recent times. She initially trained as a barrister but came to TV screens with Jennifer Paterson as The Two Fat Ladies who travelled in a motorbike and sidecar for the BBC programmes. Paterson died of cancer in 1999.

Clarissa was know for her fiery temper, fierce wit, acute intelligence and sense of humour. In addition to the law and broadcasting during her career she also ran the Books for Cooks shop in Notting Hill in London, a foodservice operation and travelled the world widely.

She was also renowned for her encyclopedic knowledge of food history and appreciation of good food and was outspoken on many issues including the countryside as well as culinary matters. Many will remember her for her refreshing non PC strongly held views. She had been unwell since the beginning of the year and died on Saturday in The Royal Infirmary in Edinburgh.