Winning 20 medals in the recent Poacher Competition organised by Lincolnshire County Foods, Jim Sutcliffe and his team from Louth proved that they have what it takes to make good quality Lincolnshire fayre.

Jim said: “I’m delighted to have won so many medals, I really believe in all the products that we make and sell but to be recognised by the judges at the Poacher Competition is real recognition!”

Amongst the awards they won were:

Their bacon was awarded Class Champion. Jim added: “Our bacon is dry cured the old fashioned way by rubbing it with our own blend of curing salt and allowing it to cure for ten days before hanging it up to dry for a further week, it makes such a difference and of course there’s none of that white foam in the pan when you cook it!” 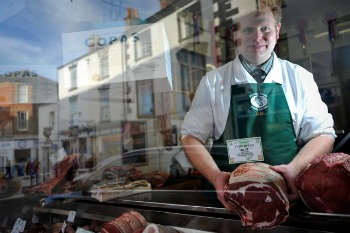 So now it’s full steam ahead for Jim and his team as Christmas approaches at speed, and to celebrate its awards from the Poacher Competition, Meridian Meats is giving one lucky customer who places their Christmas order before 16th December a chance to win their Christmas meat for free. J

Jim said finally: “I would like to take this opportunity to thank my staff for their hard work as these awards are truly won by everyone.”